If you have been to the Cinema to watch a 3D movie or to a pub to watch some 3D sports event coverage, then you may well have experienced either one of these technologies, although it’s more liked that you experienced passive 3D technology. 3D technology used to be a high end commodity to a limited amount of audience a few years back, but with the enhancements offered by the technological advances, we are lucky to have 3D TVs at our home for a considerably lower cost. Our intention is to compare and contrast the main two technologies used in 3D panels. We will talk about them individually first and then offer a comparison between them.

What is Passive 3D?

This has been a mass marketer that is been used almost everywhere. The cinemas and pubs definitely use Passive 3D technology because it’s easier and the glasses you have to wear are relatively inexpensive. I will explain how the feel of 3D is generated in Passive 3D displays used in cinemas first.

In a cinema, two images that are polarized in different directions are being projected to the screen. To do that, you need a special 3D projector and most of the time; these special 3D projectors actually consist of two projectors. To view these images (a movie is actually a sequence of images; thus, when I refer as an image, you can consider it as a sequence of images; i.e. a movie, as well), you need to wear a polarized glass. These glasses have lenses that polarize the images back to normal. That means they polarize the images in the reverse direction compared to the projected images. The specialty of the glasses is that they only make you see the corresponding image. Your right eye would only see the right image because the right lens will block the left image, and your left eye would only see the left image because the left lens will block the right image. There are two polarization techniques that are being used, as well. The IMAX 3D uses linear polarization, while circular polarization is used in RealD. The differences between them are a different topic in itself, but in brief, you have to keep your head uptight in linear polarization technique while, in circular polarization technique, you can tilt your head a bit before losing the grip you have on the 3D image.

In a TV, what happens is that the TV assigns half of a pixel for the right image and the other half to the left image. The decoding happens the same way as I’ve explained before. This may make you experience a resolution issue, but that is been addressed, as well. The Active 3D technology used to be the best for resolution freaks, but currently, the best 3D TV experience is given by a LG Passive 3D TV, so we can safely say the Passive 3D technology is catching up. 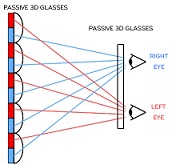 What is Active 3D?

On contrast to the Passive 3D, Active 3D is actually literary active. The technology used in Active 3D is complicated and rather different from Passive 3D. It used to be the best 3D experience in terms of resolution and it still is in most of the cases, but recently LG has emerged with a Passive 3D that can display real HD 1080p video which was a luxury only available with Active 3D before. I will explain how Active 3D works in the context of a TV.

This also has the concept of the left image and right image. Instead of splitting the pixels into two, the display panel refreshes at a significant rate displaying the left and right images alternatively. The refresh rate is typically more than 100Hz, so you are not going to notice the change. The rest of the job is up to the glass you are wearing. You have to wear a special kind of glass called Active Shutter glass. As the name suggests, it acts as a shutter. The right lens shuts off when the display is showing the left image and the left lens shuts off when the display is showing the right image. You may think that this glass should look bulky with shutters, but it actually achieves this task using a liquid crystal technology. These lenses can switch between being transparent and opaque in a fraction of second and you won’t even hear a thing. The opaque state is synonymous to closed shutter state, and the transparent state is synonymous to opened shutter state. You may be wondering how the TV syncs the images with the glass you are wearing. Well, typically the Active 3D TVs have an IR emitter that indicates which image is been displayed currently, and the glass reads this and act accordingly. It is worthwhile to mention that the refresh rates of the glasses can attain much higher rates than TVs, and the limiting factor is actually the display panels.

If all sounds appealing, what’s the catch? Well the TV is not that expensive, but the Active 3D Shutter glasses are very expensive. Typically, over $150 which means it’s going to cost dearly if you’re going to have a couple of pairs.

The conclusion, in this case, may be user biased. But let me brief down some points that are worth remembering on these two technologies. As we’ve been saying, Active 3D has been superior earlier, but Passive 3D is catching up now. Therefore, in terms of resolution, Active 3D and Passive 3D are getting equivalent. But the real catch is with the glasses. The Passive 3D glasses are inexpensive costing a couple of bucks, while Shutter glasses are highly expensive and making it a dearly investment if you are to buy 3D glasses for the whole family. Further, the Shutter 3D glasses are bulky and heavy. The fact that they have batteries and the batteries needs to be charged makes them a complete nightmare if you have multiple glasses. In Active 3D technology, most of the problems are created by low battery conditions in the glass. Another thing that should be noted is that Active 3D technology may give you headaches because the continuous flickering happening in the display panel, as well as, the glass you’re wearing. This may vary from person to person, and the brand of TV you’re using, so it’s more of a personal taste, but be warned, that is prone to happen. Also, you may want to think about the replacement cost of the glass, should they break by accident, especially if you have little kids.

On the other hand, none of these problems are issues in the Passive 3D technology. There is no flickering available, so you can enjoy the Passive 3D experience for an extended amount of time. The Passive 3D glasses are light and inexpensive and can be easily replaced. The only issue with the Passive 3D technology is that they may feature lower resolutions than Active 3D displays right now. Some say the depth and the brightness of the image also differs, but in my personal experience as well as for the specifications of popular vendors, this isn’t the case. So that’s all we can say right now and hopefully, Passive 3D TVs with real HD resolution will be available from more vendors at lower prices. 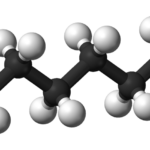