Absorptance is defined as the ratio of the radiant flux absorbed by a body, to the incident upon it. Absorptance is a property, which varies with the wavelength of the used electromagnetic waves. To understand the reason for this, one must first understand an absorption spectrum. An atom consists of a nucleus, which is made of protons, neutrons, and electrons that are orbiting around the nucleus. The orbit of the electron depends on the energy of the electron. Higher the energy of the electron farther away from the nucleus it would orbit. Using quantum theory it can be showed that electrons cannot just get any energy level. The energies the electron can have are discrete. When a sample of atoms is provided with a continuous spectrum over some region, the electrons in the atoms absorb specific amounts of energies. Since the energy of an electromagnetic wave is also quantized, it can be said that the electrons absorb photons with specific energies. At the spectrum taken after the light is passed through the material, certain energies appear missing. These energies are the photons that have been absorbed by the atoms. The total absorptance of an object is the absorptance taken over the whole spectrum. Spectral absorptance is the absorptance of one specific wavelength. It must be noted that the absorptance is a property of the whole object. Absorptance depends on the dimensions of the object as well as the concentration of the material.

Absorbance is defined as Log10 (I0/I); where I0 is the intensity of the incident light ray, and I is the intensity of the light ray that passed through the sample. The light ray is monochromatic and set to a specified wavelength. This method is used on spectrophotometers. The absorbance depends on the concentration of the sample and length of the sample. The absorbance of a solution is linearly proportional to the concentration, according to the Beer – Lambert law, if the I0/I value lie between 0.2 and 0.7. This is a useful law in spectroscopic methods used in quantitative analysis. When absorbance is defined in fields other than chemistry, it is defined as Log¬e(I0/I). 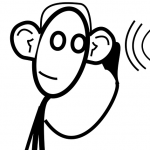