Respiration is generally the formation of energy in the form of adenosine triphosphate (ATP) by burning food with oxygen, but there is another type of respiration taking place in the absence of oxygen called anaerobic respiration. There are many differences between these two main types of respiration including the biochemical pathways as well as the volume of energy produced.

What is Aerobic Respiration?

According to the definition, aerobic respiration is a set of events that occur inside the cells of organisms, to produce ATP by burning food in the presence of oxygen. ATP is the best form to store energy inside cells. After the whole process of aerobic respiration, carbon dioxide is formed as a waste product. Sugars (glucose), amino acids, and fatty acids are amongst the highly consumed respiratory substrates in respiration. Aerobic respiration process uses oxygen as the final electron acceptor. The entire process of respiration involves four major steps known as glycolysis, oxidative decarboxylation of pyruvate, citric acid cycle (Krebs cycle), and oxidative phosphorylation. After all the processes been taken place, there would be a net amount of 38 ATP molecules produced from one glucose molecule (C6H12O6). However, due to leaky membranes and efforts spent in moving some molecules during the process, the net production limits to around 30 ATP molecules from one glucose molecule. The magnitude of this pathway is enormous; there are trillions of ATP molecules produced through aerobic respiration at all the innumerable number of cells in the body, and a huge amount of oxygen is demanded while the same amount of carbon dioxide is produced. All these demands and productions are sustained through external respiration of inhale and exhale with the facilitation of the circulatory system to transport both oxygen and carbon dioxide up and down.

What is Anaerobic Respiration?

Respiration is important to gain energy; however, not all the places in the world has oxygen, and that demands the organisms to adapt with different techniques in order to live in such environments. Anaerobic respiration is one such methods of extracting energy from organic materials using other chemicals viz. sulphate or nitrate compounds as the final electron acceptor in the process. Additionally, these terminal electron acceptors are less efficient in their reduction potentials and could only produce a couple of ATP molecules per glucose molecule. Usually, the waste products are sulphides, nitrites, or methane and those are unpleasant smells for humans and most other animals. Lactic acid is another waste generated through the anaerobic respiration. It is interesting to know that anaerobic respiration could take place in human bodies as well, especially when there is a high demand of oxygen to operate rapid muscle movements. In such cases, lactic acid is produced, and that causes muscle cramps. Anaerobic respiration is synonymous with fermentation, especially in the glycolytic pathway, but ethanol and carbon dioxide is formed as waste products in fermentation. 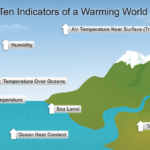