The key difference between alcohols and spirit is that we can make alcohol from fermentation whereas the spirit comes from distillation.

There are proofs to say that alcohol beverages are running back to a very long time. When there was no scientific knowledge, people used the fermentation process to make alcoholic beverages. Spirits are the group of consumable beverages among alcohols.

1. Overview and Key Difference
2. What are Alcohols
3. What is Spirit
4. Side by Side Comparison – Alcohols vs Spirit in Tabular Form
5. Summary

The characteristic of the alcohol family is the presence of a –OH functional group (hydroxyl group). Normally, this –OH group attaches with an sp3 hybridized carbon. The simplest member of the family is methyl alcohol, which we know commonly as methanol. We can classify alcohols into three groups as primary, secondary and tertiary. This classification depends on the degree of substitution of carbon to which the hydroxyl group directly attaches. If the carbon has only one other carbon attached to it, the carbon is a primary carbon, and the alcohol is a primary alcohol. If the carbon with the hydroxyl group is attached to two other carbons, then that is secondary alcohol and so on.

Moreover, we name alcohols with a suffix –ol according to the IUPAC nomenclature. First, we should select the longest continuous carbon chain to which the hydroxyl group directly attaches. Then the name of the corresponding alkane is changed by dropping the final e and adding the suffix ol. 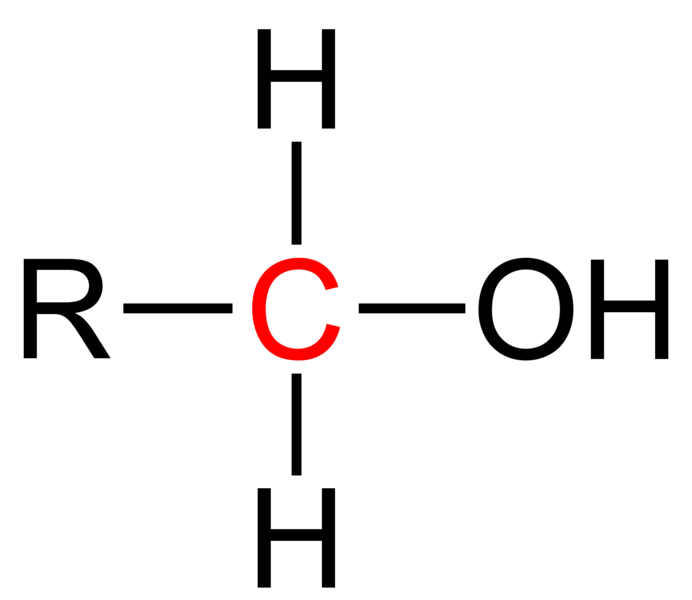 Alcohols have a higher boiling point than the corresponding hydrocarbons or ethers. The reason is the presence of intermolecular interaction between alcohol molecules through hydrogen bonding. If the R group is small, alcohols are miscible with water. However, as the R group is becoming larger, it tends to be hydrophobic.

Furthermore, alcohols are polar. The C-O bond and O-H bonds contribute to the polarity of the molecule. The polarization of the O-H bond makes the hydrogen partially positive and explains the acidity of alcohols. Alcohols are weak acids, and the acidity is close to that of water. –OH is a poor leaving group, because OH– is a strong base. But, protonation of the alcohol converts the poor leaving group –OH into a good leaving group (H2O). The carbon, which directly attaches to the –OH group, is partially positive; therefore, it is susceptible to nucleophilic attack. Further, the electron pairs on the oxygen atom make it both basic and nucleophilic.

Spirit is the alcohol beverage that we can produce via the distillation of alcohol. It mainly consists of ethanol and is a very strong beverage. Primarily, we should allow the sugar-containing materials such as fruits, grain, vegetables, sugar cane to ferment by anaerobic bacteria like yeast. 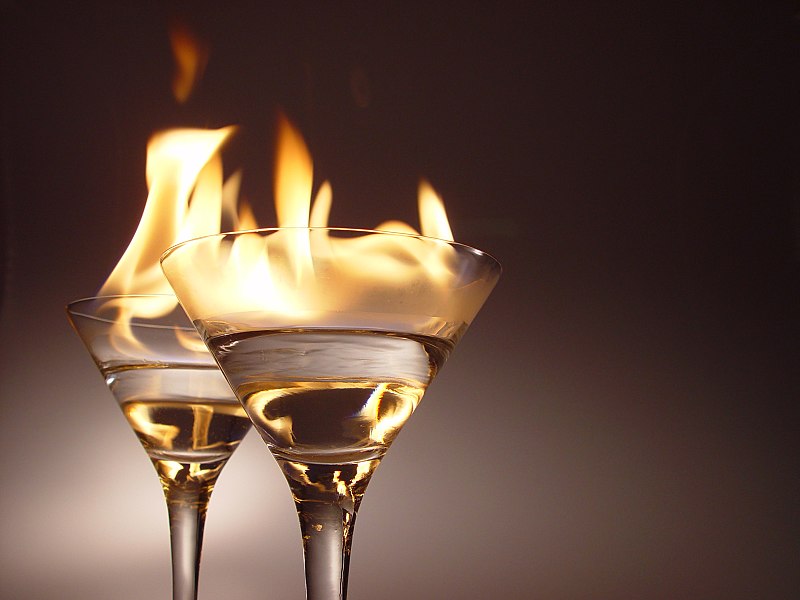 In the fermentation process, sugars convert into ethanol. Then, we need to distil this content. There, alcohol has a lower boiling point than water; therefore, it evaporates, and then the collected vapour condenses back to form the concentrated spirit. We can measure spirits according to its alcohol content compared to the volume. Brandy, rum, vodka, and whiskey are some examples of spirit beverages.

What is the Difference Between Alcohols and Spirit?

Alcohol is any organic compound in which the hydroxyl functional group binds to carbon while the spirit is an alcohol beverage which we can produce via the distillation of alcohol. The key difference between alcohols and spirit is that we can make alcohol from fermentation whereas the spirit comes from distillation.

Moreover, another difference between alcohols and spirit is that, all the alcohols are not consumable while spirits are the group of consumable beverages. Moreover, spirit mainly contains ethanol (it is an alcohol). However, when considering all the alcohols, there are different compounds such as methanol, ethanol, propanol, etc. Further, the strength of the spirit is measured by the amount of alcohol they contain. 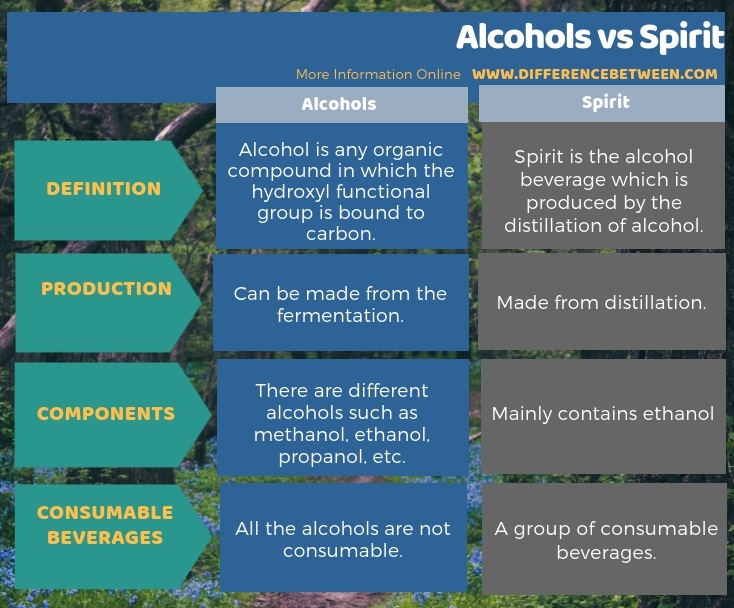 Although commonly beverages are known as alcohols, all the alcohols are not consumable. Spirits are the group of consumable beverages. The key difference between alcohols and spirit is that we can make alcohol from fermentation, but the spirit comes only from distillation. 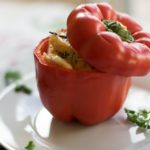