On the display side, iPhone 4 is having a 3.5” scratch resistance Retina display that supports 960x640p resolution whereas Apple iPad 2 is also having scratch resistance oleophobic coated display but it is 9.7 inches with 1024x768p resolution and gives ultimate multimedia Entertainment Experience. Storage wise iPad 2 can go up to 64 GB whereas iPhone 4 got 32 GB.

If we compare iPad 2 with the day to day life, it substitutes most of the functions from Laptops and Desktops, News Papers, books and Magazines, Video and Voice Callings while travelling to work, Check emails on the way, Check the Maps on the way, Listening to music and watching movies while on go, at office taking minutes, record events, remote desktop activities, SSH and FTP, Play games, take photos and record videos ,live meetings and video conferencing, use as VoIP client or VoIP phones, Social Networking and a lot of other features. We can perform most of our day to day activities with just one device, iPad with Apple Apps. Just think about flying from Los Angeles to Sydney, if you have iPad, time will also fly with you.

iPad2 has excellent multitasking feature with the support of high performance A5 processor and revamped OS iOS 4.3. The new A5 processor’s clock speed is twice as faster than A4 and 9 times better on graphics while the power consumption remains same. Apple has added some new features to iPad 2 like HDMI capability – have to connect through Apple Digital AV adapter, camera with gyro, 720p video camcorder and a new software PhotoBooth, front facing camera with FaceTime for video conferencing, and two applications introduced – improved iMovie and GarageBand that turns iPad 2 as a small musical instrument. However it retained the same display and the same size, but it’s slimmer and lighter than previous iPad, the device weighs 1.3 lbs and 8.8 mm thin.

It’s available in black and white colors and use the same battery as iPad and also priced same like iPad. Apple introduces a new bendable magnatic case for iPad 2, named as Smart Cover. iPad 2 will be available in the US market from March 11th and to others from March 25th. iPad 2 will have variants to support both 3G-UMTS network and 3G-CDMA network and will also release Wi-Fi only model. 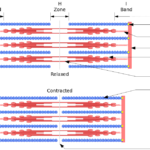