Different manufacturers take different time spans between the major releases of their signature products. Since we are talking about a highly evolving industry of smartphones, it’s always wise to update your signature line at least once a year. Hence manufacturers usually take less than one year to release the successor device. With Apple the waiting duration is usually 10 months and after the successor is released, Apple tends to support two older generations to address different price points in the mid-range market. For instance, when Apple released the iPhone 5, they retained the iPhone 4S and iPhone 4 to fill the slots in the mid-range market of $99 and free with the plan respectively. However, Apple has done something they’ve never done before. This in turn signifies the pressure Apple has from its rivals to excel in the market at the top. Apple has released a budget friendly smartphone simultaneously with the premium iPhone 5S.  Therefore, now customers in mid to low range have two options; iPhone 5 and 5C. Here, we strive to check the difference between Apple iPhone 5 and iPhone 5C to see whether Apple has created a competition within its own brand.

Apple iPhone 5C or the budget-friendly iPhone was one of the worst kept rumors in the World Wide Web and apparently it feels good in your hand albeit its plasticky feeling. According to Apple, iPhone 5C is a replica of iPhone 5 with a polycarbonate back plate that comes in different flashy color combinations. It comes in green, blue, white, pink, and yellow colors spreading through the hard coated polycarbonate back plate. Apple has been gracious enough to include the same 4 inch retina display featuring a resolution of 1136 x 640 pixels at a pixel density of 326 ppi as the iPhone 5. In fact, when we say it was a replica of iPhone 5 without the premium back plate, that should cover everything we have to say about iPhone 5C. However for the sake of being clear, we’ll include more trivial information about Apple iPhone 5C.

Apple has added support for 13 LTE bands in Apple iPhone 5C in order to maximize the penetration of the device. This device is more aimed towards the budget markets although it is not so cheap standing at $99 with 2 year contract. If sold without the contract, it stands at $739 which is very steep for what Apple calls a budget friendly smartphone. In fact, if we compare it against Apple iPhone 5, it is only $60 cheaper which easily compensates with the aesthetics and the premium look it offers. So what we are actually looking at is the most expensive budget smartphone ever, and we really can’t expect anything less from Apple either. In addition, Apple has made this a good excuse to bump the price of the iPhone 5S up to $869 which is really steep. Apple iPhone 5C is supposed to be released in US, Australia, Canada, China, France, Germany, Japan, Singapore, and the UK on the 20th of September 2013.

Coming to the trivial facts, Apple iPhone 5C has the same A6 dual core processor as iPhone 5 at the same hardware configurations. It seems to run Apple iOS 7 smoothly, which is to be expected because iOS 7 is to be released for iPhone 5, as well. The rear camera is still at 8MP although the front Facetime camera has been updated to HD. iPhone 5C comes in either 16GB or 32GB models without the ability to expand the storage using microSD cards. Apple iPhone 5C also uses the Nano SIM which was used in Apple iPhone 5. It is slightly longer, wider and thicker than Apple iPhone 5 though. Its weight has also increased at 132g. The battery seem to have received an upgrade because Apple has changed the standby time and talk time on 3G to 250 hours and 10 hours respectively.

Apple iPhone 5 was introduced as the successor for prestigious Apple iPhone 4S and was launched on the 21st of September 2012 to the stores. Apple claimed iPhone 5 as the thinnest smartphone in the market at that time scoring a thickness of 7.6mm, which is really cool. It scores dimensions of 123.8 x 58.5mm and 112g of weight which makes it lighter than most of the smartphones out there in the world. Apple has kept the width at the same pace while making it taller in order to let the customers hang on to the familiar width when they hold the handset in their palms. It is said to be made entirely from glass and Aluminum which is going to be great news for artistic consumers. No one would doubt the premium nature of this handset for Apple has tirelessly engineered even the smallest parts. The two tone back plate feels genuinely metallic and is pleasing to hold on to. We particularly loved the Black model although Apple offers a White model as well. It uses an Apple A6 chipset along with Apple iOS 6 as the operating system. It will be powered by a 1GHz Dual Core processor that Apple has come up with. This processor is said to have Apple’s own SoC using ARM v7 based instruction set. The cores are based on Cortex A7 architecture which was previously rumored to be of A15 architecture. It is to be noted that this is not the Vanilla Cortex A7, but rather an in-house modified version of Apple’s Cortex A7 probably fabricated by Samsung. Apple iPhone 5 been a LTE smartphone, we are bound to expect some deviation from the normal battery life. But Apple has addressed that problem with the custom made Cortex A7 cores. As you can see, they haven’t increased the clock frequency at all, but instead, they have been successful in increasing the number of instructions executed per clock. Also it was noticeable in the GeekBench benchmarks that the memory bandwidth has been significantly improved as well. So all in all, now we have reason to believe that Tim Cook wasn’t exaggerating when he claimed that iPhone 5 is twice as faster as iPhone 4S. The internal storage would come in three variations of 16GB, 32GB and 64GB with no option to expand storage using microSD card.

Apple iPhone 5 has 4 inch LED backlit IPS TFT capacitive touchscreen featuring a resolution of 1136 x 640 pixels at a pixel density of 326ppi. It is said to have 44% better color saturation with full sRGB rendering enabled. The usual Corning gorilla glass coating is available making the display scratch resistant. Apple CEO Tim Cook claims that this is the most advanced display panel in the world. Apple also claimed that the GPU performance is as twice better compared to iPhone 4S. There may be several other possibilities for them to achieve this, but we have reason to believe that the GPU is PowerVR SGX 543MP3 with a slightly overclocked frequency compared to that of iPhone 4S. Apple has apparently moved the headphone port all the down to the bottom of the smartphone. If you have invested in iReady accessories, you may well have to buy a conversion unit because Apple has introduced a new port for this iPhone. The handset comes with 4G LTE connectivity as well as CDMA connectivity in different versions. The implications of this are subtle. Once you commit to a network provider and a specific version of Apple iPhone 5, there’s no going back. You can’t buy an AT&T model and then transfer the iPhone 5 to Verizon or Sprint’s network without buying another iPhone 5. So you will have to think rather carefully on what you want before committing to a handset. Apple boasts of an ultrafast Wi-Fi connectivity as well offering Wi-Fi 802.11 a/b/g/n dual band Wi-Fi Plus cellular adapter. Unfortunately Apple iPhone 5 doesn’t feature NFC connectivity nor does it support wireless charging. The camera is the regular culprit of 8MP with autofocus and LED flash that can capture 1080p HD videos @ 30 frames per second. It also has a front camera to make video calls. It is worthwhile to note that Apple iPhone 5 only supports nano SIM card. The new operating system seems to provide better capabilities than the old one as usual. We will report more news on the matter as soon as we have it. 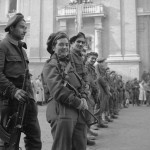