Home / Language / Grammar / Difference Between Because and Because Of

Because vs Because Of

Because is an English word that is used to give a reason or a cause of an event or a situation. Sometimes we say because of instead of just because while introducing a reason. This is perfectly OK though there are differences in usage and the contexts in which the two are used. This article attempts to highlight these subtle differences.

Because is an English word that is one of the ways that we use to express a reason or account of something.

• I am late because it is raining outside

• Helen did not go to school because she was sick

• We had to stop playing football because it was raining

• John found the exam paper easy because he had studied hard

• He caused an accident because he was driving very fast

It is clear from all these examples that because is a word that provides the reason for events or situations that have been described in these sentences. If a boy is absent in the class and the teacher wants to know the reason the next day, the boy uses the word because to introduce the reason. In all the sentences described above, because has been used as a conjunction and there are always a verb and a subject that follow because.

Usage of Because of

‘Because of’ is used to give a reason for a happening or an event. It is used as a preposition, and there is always a noun followed by this phrase, and the verb followed is an ‘ing’ verb. Take a look at the following examples.

• Marie’s English is hard to understand because of her accent

• Their family moved to New York because of his work

• The train was late because of foul weather

• I am sorry because of you

What is the difference between Because and Because Of?

• Both because and because of are used to give reasons.

• Because of is a preposition, whereas because is a conjunction.

• Because is used in place of since and as.

• Because of is used in place of ‘on account of’ and ‘owing to’.

Difference Between Why and Because 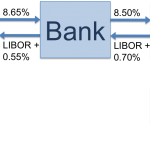