What is a Black Hole?

Astonishingly, the first idea of a black hole was first put forward by a geologist. It was John Michell who described a massive body with a high density that would not even let light escape from the surface of it. He proposed this on a letter to Henry Cavendish in 1783. A black hole is dead star, which has a mass greater than 3 solar masses. The general theory behind black holes is that the escape velocity of the surface of the black hole or somewhere above the surface is greater than the speed of light. The limit where the escape velocity is equal to the speed of light is known as the event horizon. The event horizon is the limit where even light cannot escape from the black hole. The inside of a black hole is usually referred as a singularity. A singularity is a place where the density is infinite, and the volume is zero. What happens inside the event horizon is not detectable through any means. In some black holes, there is an accretion disc outside the event horizon. These discs are mainly formed by attracting mass from a nearby star in a binary system.

What is a Wormhole?

A wormhole is a hypothetical object or a phenomenon that would fold the three dimensional space through a higher dimension. This means a shortcut is created through a higher dimension in the space time curve we know. However, wormholes are only a theoretical phenomenon. These are neither observed nor created in practice yet. Einstein – Rosen Bridge is one of the best existing applications of wormholes if they are ever detected. The Einstein – Rosen Bridge proposes a shortcut through the existing space –time curve.

Difference Between Kinematic and Dynamic Viscosity 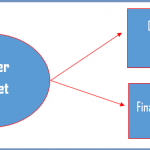