1. Overview and Key Difference
2. What is Butane
3. What is Butene
4. Side by Side Comparison – Butane vs Butene in Tabular Form
5. Summary

Butane is an organic compound having the chemical formula C4H10. It is an alkane; thus, it is a saturated compound. Therefore, there are no double or triple bonds between the atoms of this molecule. It exists as a gas at room temperature and pressure. This compound has four carbon atoms and 10 hydrogen atoms. These atoms arrange in either a linear structure or a branched structure. We call the linear structure as “n-butane” and the branched structure as “isobutene”. However, according to the IUPAC nomenclature system, the term butane refers to the linear form. Isobutene has one methyl branch attached to a three-carbon backbone.

The molar mass of this gas is 58.12 g/mol. It is a colorless gas. It has gasoline-like odor. The melting and the boiling points are −134 °C and 1 °C respectively. In addition to that, this gas is a highly flammable and easily liquefied gas. When liquefied, it quickly vaporizes at room temperature. When there is enough oxygen, this gas burns, giving carbon dioxide and water vapor. But if the amount of oxygen is limited, it forms carbon soot and carbon monoxide as well; due to incomplete combustion.

When considering the uses of butane, we can use it for gasoline blending, as a fuel gas, as a fragrance extraction solvent, as feedstock for the manufacture of ethylene, as an ingredient for the production of synthetic rubber, etc.

Butene is an organic compound having the chemical formula C4H8. “Butylene” is a synonym for the same compound. This compound has four carbon atoms and 8 hydrogen atoms. There is a double bond between two carbon atoms. Therefore, it is an unsaturated compound. It falls under the category of alkenes. It is a colorless gas at room temperature and pressure. We can find this gas as a minor constituent in crude oil. Thus, we can obtain this compound via catalytic cracking in a refinery.

Due to the presence of the double bond, this compound has isomers. There are four major isomers; they are, But-1-ene, (2Z)-but-2-ene, (2E)-but-2-ene and 2-methylprop-1-ene (isobutylene). All these isomers exist as gases. We can liquefy them by two methods; we can lower the temperature or increase the pressure. These gases have distinct odors. Moreover, they are highly flammable. The double bond makes these compounds more reactive than the alkanes with a similar number of carbon atoms. When considering the applications of this compound, we can use them as monomers in the production of polymers, in the production of synthetic rubber, in the production of HDPE and LLDPE, etc.

What is the Difference Between Butane and Butene?

The below infographic presents more details on the difference between butane and butenein tabular form. 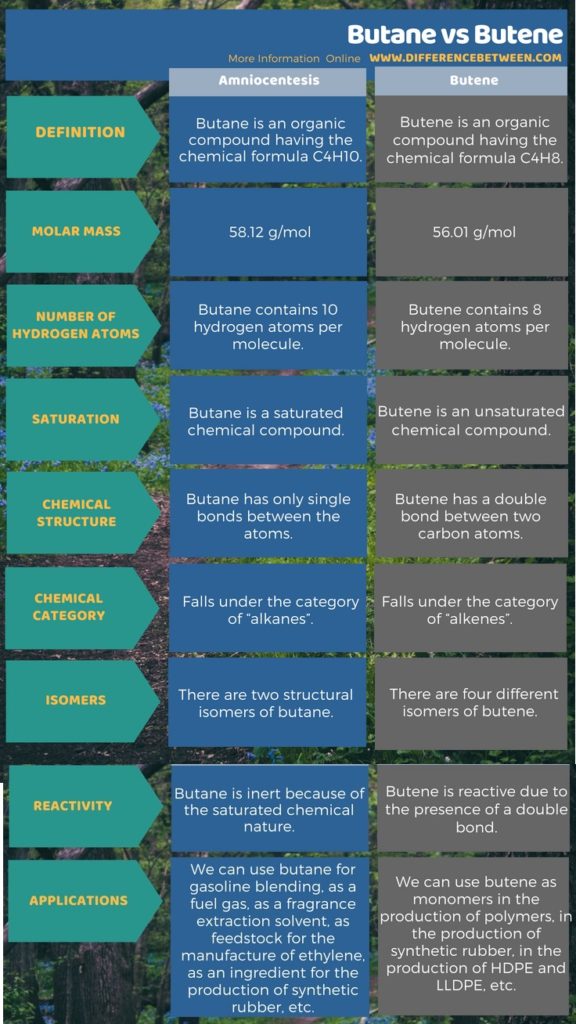 Difference Between Acetylation and Methylation

Difference Between Acetylene and Propane

Difference Between MAPP Gas and Propane

Difference Between Iso and Neo Structures 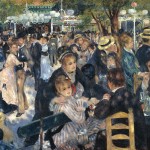