Cancer was once known to be the most incurable disease. It is usually caused by some malfunctioning of the cells inside the human body. There are so many external and internal causes for this disease. As the time moves on, the solutions to the problems are given by the professionals in this field. The two kinds of solutions given for cancer are the chemotherapy and radiotherapy. The two processes are very different in nature and depending on the level of disease, one of the two treatments is recommended for the cancer patients.

Chemotherapy is that kind of treatment for cancer patients that uses the chemicals in the process. The result of this treatment causes the unwanted cells to be damaged by the use of the chemicals. It is true that the drugs used in the treatment gives a favorable response, but they might cause damage to some normal cells as well. It is ideal to use this treatment for those patients who could discover their disease at early stage, because the drugs positively affect to the roots causing the growth of the tumors at this stage. This therapy fails in the situations where the problem is diagnosed at later phases and when the drugs are unable to cope with the growing number of cancer cell activities. The side effects includes the damage to the hairs of the body, fatigue, the darkening of the skin color, reduction in the blood platelets and the swelling in the digestive system of the body. Two other types include the treatment by using chemicals at the time when the disease is diagnosed at the earlier stages and secondly when it is cured and the treatment is repeated for the preventive care.

The radiotherapy is also used for the treatment of this disease. But the process of the treatment is in such a way that the use of rays is done during the process instead of using chemicals. The main feature of this process is that, as it does destroy the unwanted cells of the body where it is conducted, it only has side effects limited to that portion of the body. The treatment is done for the same purpose- the killing of the unwanted cells. Different parts of body cells respond differently to the treatments. At some areas the cells causing the tumor are destroyed rapidly, while in other parts the affects are not the same. Smaller tumors will have more positive affects, and not all tumors can be treated in this way. But this process also destroys the normal cells too. Radiation can be given to the body from outer as well as inner side.

The most prominent difference between the two therapies is the way of their treatment and the side effects are also different in both. In the Chemotherapy, chemicals are used to treat the cancer cells and in Radiotherapy, the radiations are used. The treatment through Chemotherapy involves the treatment of the whole body, and so the affects are not limited to just a single area of the body in the end, like the damage to the normal cells of the whole body. As for the Radiotherapy, the treatment is applied on a specific area and thus, the reactions are just limited to that part and it can also be applied externally. It is said that the radiotherapy is less painful than the other one. In the chemotherapy all the past and present details are counted before the treatment, in radiotherapy the process is a bit shorter one.

Difference Between Radiation and Chemotherapy 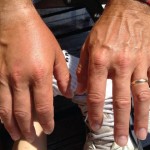 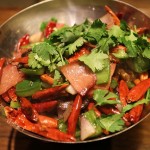