What does Compare mean?

The verb compare carries with it the meaning of ‘to represent or describe similar or liken’. If you have the intention of representing the similarities between two objects, then you use compare followed by ‘to’. Compare also means ‘examining the qualities with a view to discover resemblances or differences.’ In this case, compare is usually followed by ‘with.’ In other words, compare can mean simply showing similarities between two objects; it can also mean showing similarities as well as differences between two objects. Comparison, the noun form of compare, is the basis of the figure of speech called Simile. You compare between two similar objects. It is usual to compare the face of a lady to the moon. Look at the following sentence,

Here, the word ‘moon’ is the standard of comparison and ‘face’ is the object of comparison’. You have drawn a comparison between the face and the moon. In other words, you have likened her face with the moon in terms of beauty.

What does Contrast mean?

Her face is beautiful than the moon.

Her laughter was sweeter than the piano music. 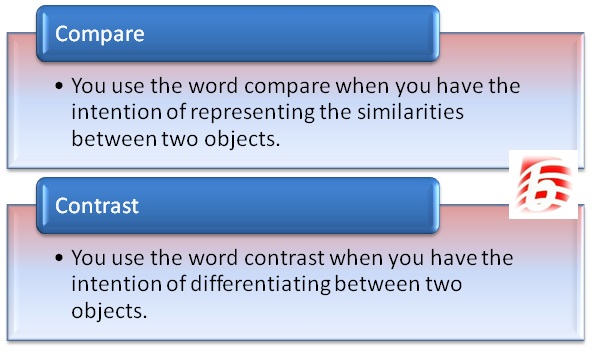 What is the difference between Compare and Contrast?

This is the basic difference between compare and contrast.