Movement and structure play important roles in the skeletal-muscular system. They facilitate various movements by attachment to numerous ligaments. Both coronoid and coracoid processes thus play an important role in facilitating movement.

1. Overview and Key Difference
2. What is Coronoid
3. What is Coracoid
4. Similarities Between Coronoid and Coracoid
5. Side by Side Comparison – Coronoid vs Coracoid in Tabular Form
6. Summary

The coronoid process also facilitates the attachment of the rounded bundle of muscle fibres known as the flexor pollicis longus muscle.

The coracoid process is present on the edge of the scapula. It is placed at the lateral edge of the superior anterior part of the scapula. It is a pointed structure, and its main function is to stabilize the shoulder joint together with the acromion. Moreover, it is a thick process and is curved in nature. It is attached to the broad base of the upper part of the neck of the scapula. The structure of the coracoid varies when it develops. It becomes smaller and changes the direction and finally projects forward and laterally.

The coracoid has two main portions – the ascending portion and the horizontal portion. The medial portion is attached to the conoid ligament. The coracoid is also the site of attachment for several structures such as the pectoralis minor muscle, the biceps brachii muscle and the superior transverse scapular ligament.

What are the Similarities Between Coronoid and Coracoid?

What is the Difference Between Coronoid and Coracoid?

The below info-graphic summarizes the difference between coronoid and coracoids. 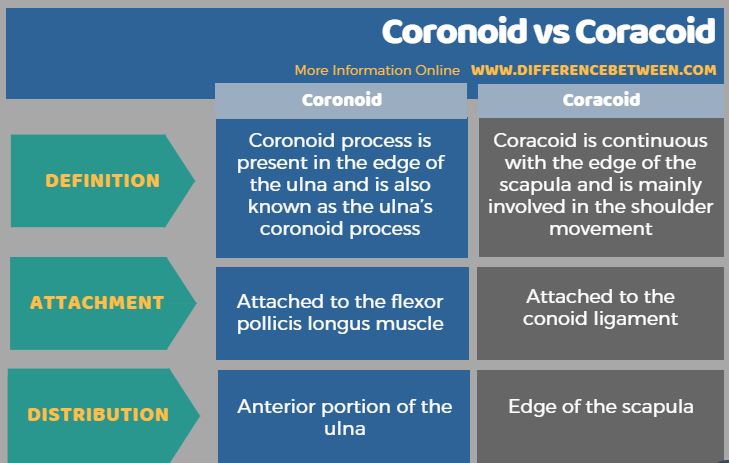 The coronoid and coracoid are two processes that aid in the movement and maintenance of structures. These terms are often confused due to the similarity they show in structure. However, the key difference between coronoid and coracoids is their distribution. While the coronoid process is connected to the ulna,  the coracoid process is connected with the scapula. Thus, the coronoid is also known as the ulna’s coronoid process, and the coracoid is known as the scapula’s coracoid process. They both are pointed and curved structures. They have unique features on their surfaces, and the attachments also vary among the two processes.

Difference Between Cerebrum and Cerebellum

Difference Between Sacrum and Coccyx

Difference Between Sulcus and Fissure 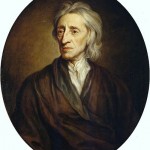