Ellipse and ovals are similar looking geometrical figures; therefore, their appropriate meanings are sometimes confusing. Both being planar shapes with similar looks, such as an elongated nature and the smooth curves make them almost identical. However, they are different, and their subtle differences are discussed in this article.

When the intersection of the conic surface and the plane surface produces a closed curve, it is known as an ellipse. It has an eccentricity between zero and one (0<e<1). It can also be defined as the locus of the set of points on a plane such that the sum of the distances to the point from two fixed points remains constant. These two fixed points are known as the ‘foci’. (Remember; in elementary math classes the ellipses are drawn using a string tied to two fixed pins, or a string loop and two pins) 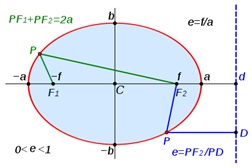 When the semi-major axis and the semi-minor axis coincide with the Cartesian axes, the general equation of the ellipse is given as follows.

The geometry of the ellipse has many applications, especially in physics. The orbits of the planets in the solar system are elliptical with the sun as one focus. The reflectors for antennae and acoustic devices are made in elliptical shape to take advantage of the fact that any emission form a focus will converge on the other focus.

The oval is not a precisely defined figure in mathematics. But it is recognized as a figure when a circle is stretched on two opposite ends, i.e. similar to the ellipses or resembling the shape of an egg. However, the ovals are not always ellipses.

The ovals have the following properties, which differentiate them from other curved figures.

• Simple, smooth, convex closed plane curves. (The equation of the oval is differentiable at all points)

• They roughly share the same figure as the ellipses.

• At least there is one axis of symmetry.

What is the difference between Ellipse and Oval?

• Ellipses are conic sections with eccentricity (e) between 0 and 1 while ovals are not precisely defined geometrical figures in mathematics.

• An ellipse is always an oval, but an oval is not always an ellipse. (Ellipses are a subset of ovals)

Difference Between Hyperbola and Ellipse

Difference Between Association and Correlation

Difference Between Ball and Sphere 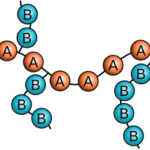