Fertilization is the process of fusing male gamete, the spermatozoon, with the female gamete, the oocyte, to produce the zygote. Fertilization occurs within 24 hours of ovulation in the ampulla, the most widened part of the fallopian tube. This process begins when the sperms enter into the vagina. Once the sperms are placed in the vagina, they migrate through the cervix to the uterine tube with the help of the movement of their flagella. Sperms can, usually, stay viable for several days in the female genital tract, but the oocyte lasts up to about 24 hours. Hence, intercourse must occur between 3 days before and one day after ovulation for a successful fertilization. Although many sperm cells reach the oocyte, only one will penetrate the membranes of oocyte to produce the zygote. Once the sperm cell reaches inside the oocyte, second meiotic division occurs in the oocyte, resulting haploid nucleus. The nucleus then fuses with the haploid nucleus of sperm cell to form the zygote. This fusion finally completes the process of fertilization.

Implantation is the process of adhering blastocyst to the endometrium after the fertilization. It takes place after about 8-10 days of fertilization. The trophoblast cells located outside of the blastocyst can produce proteolytic enzymes that are able to dissolve any tissue, which they touch. This action allows blastocyst to invade into endometrium. Implantation causes several changes to blastocyst, trophoblast and uterus. As invasion continuous, the blastocyst differentiates to form three germ layers namely; endoderm, ectoderm and mesoderm. The trophoblast that are embedded in the endometrium lately form the chorion and a part of the placenta. During the implantation, the endometrium becomes thicker, soft and highly vascular in order to support the developing embryo. Under normal conditions, the implantation, usually, occurs on the anterior or posterior walls of the uterus. However, if the implantation occurs at sites closer to internal os of the cervix, it will lead to the abnormal condition called placenta previa. 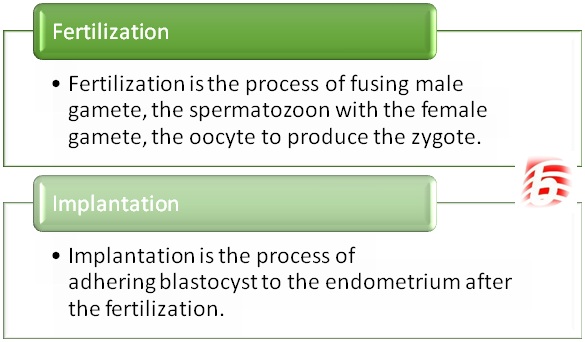 What is the difference between Fertilization and Implantation?