All plants and animals (including human beings) need food to live and to have the energy to do work. Sun is the primary source of energy for all living things. Photosynthetic organisms, especially green plants can make use of energy of the sunlight and convert it into their food by the process of photosynthesis. Therefore, plants are the primary producers. The foods produced by the primary producers act as the primary food sources for the rest of the living organisms that belong to the other levels of a food chain. Hence, herbivores eat the primary producers and in turn, carnivores eat  herbivores. This is a simple food chain but there are many food chains, and these are interconnected to make up a food web. In this complex network, the energy passes from one organism to another like a spider’s web.

What is Food Chain?

Food chain is a single pathway that shows how organisms interact with each other for food.  Basically, food is a basic requirement of all living organisms. They ingest food and digest them in order to absorb nutrients for energy production. Sun is the prime source of each food chain. Sun provides food to the plant world as they convert it into food. From the stored energy, plants use some for themselves by storing in stem, roots and leaves. And, herbivores depend on the stored foods in plants. Therefore, herbivores become the primary consumers. Secondary consumers are mostly carnivores, and they eat herbivores and get energy. Thus, plants are the only producers in this food chain which begins with the sun, while the other organisms are consumers; herbivores as primary consumers while carnivores as secondary consumers.

Likewise, there are also decomposers such as bacteria and fungi. They convert dead matter into simple compounds in soil and water and into gases such as carbon dioxide, H2S and nitrogen and release back to the air. They play an important role in this food chain as they recycle the nutrients for the use again by the producers (plants). So, actually, the food chain begins with these decomposers. Below illustration shows such a food chain.

However, there is not one party in a single food chain, but many consumers in the animal world interconnect with one another.

What is Food Web?

Food web is a complex network of food chains. Generally, living organisms depend on several or many food sources. They interact with each other in many ways not only by a single food chain. Hence, food web has many interconnected food chains. That means; a particular animal may be a part of many chains instead of one and thus, there are many food chains that are interconnected in the form of a food web.

However, one should not think that the entire energy that a herbivore gets from plants gets transferred to the carnivore that eats this herbivore. The herbivore uses some of the food to move and grow while only a small fraction remains in its body to make a body mass. Similarly, when the carnivore eats it, it also utilizes the energy, and only a small fraction of this energy remains in its body when a tertiary consumer eats it. This explains why there are more herbivores than carnivores. 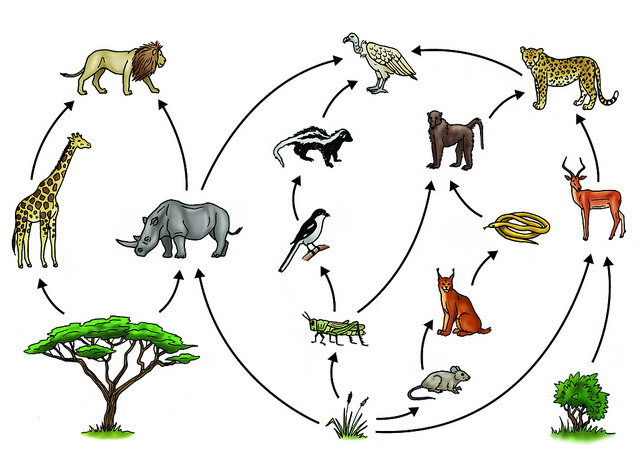 What are the Similarities Between Food Chain and Food Web?

What is the Difference Between Food Chain and Food Web?

Below illustration shows a summary of the difference between food chain and food web. 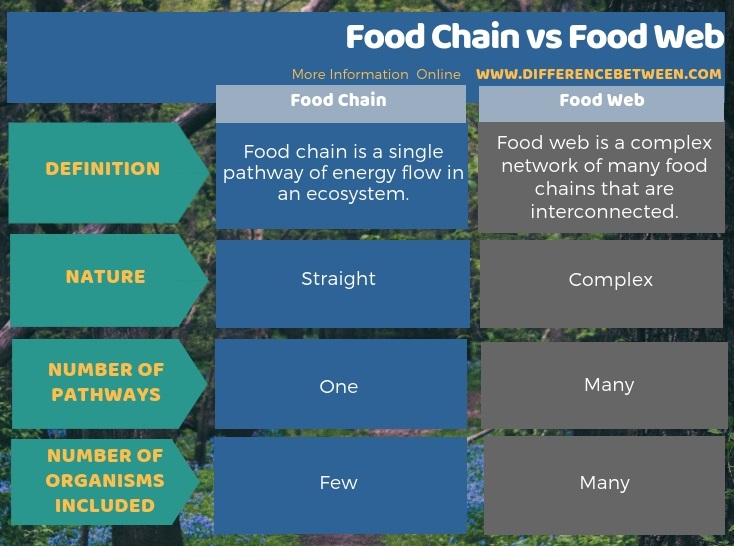