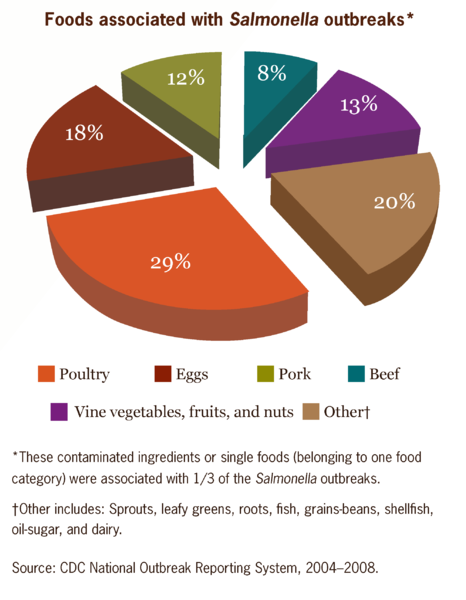 Livestock raised and slaughtered under the modern farming conditions are frequently contaminated with Salmonella or Campylobacter. Although the level of contamination is very low at the egg stage, there is a massive amplification of the infection during processing, storage and distribution resulting in extensive contamination.

Gastroenteritis is the commonest form of acute gastrointestinal infection, usually presenting with diarrhea with or without vomiting. Usually, children can have 3-6 bouts of severe diarrhea every year, in the developing world. Up to 2 million people die annually due to diarrheal disease, but the recently introduced oral rehydration programs have reduced the mortality significantly. Diarrhea is less common and less likely to cause death in the Western world. But it is a major cause of morbidity among elderly. Travelers to developing countries, men having sex with men and infants in day-care facilities have a higher risk of getting infectious diarrhea.

Most common cause of diarrhea and vomiting in young adults is viral gastroenteritis which is less commonly seen among adults. In low-income countries, it is a major cause of morbidity and mortality. In developing countries, protozoal and helminthic gut infections are relatively common, but these forms are rare in the West. Bacterial infection is the most common cause of significant adult gastroenteritis worldwide. Salmonella, Campylobacter jejuni, Shigella, E. coli, Vibrio, Yersinia enterocolitica, Staphylococcus aureus, Clostridium difficile and Bacillus cereus are the main bacterial pathogens that cause gastroenteritis.

Three different ways are employed by bacteria in pathogenesis. They are,

The organism can use more than one of these methods. Other than these direct mechanisms, some people may develop post-infectious irritable bowel syndrome.

Most bacteria causing diarrhea first adhere to the gut mucosa. Mode of action is by effacement of the intestinal mucosa. The commonest clinical presentation is moderate watery diarrhea. Enteropathogenic E. coli and Enteroaggregative E. coli follow this mechanism in causing gastroenteritis.

In infections by some organisms, mucosal invasion acts as the pathological basis. They cause destruction and penetration of mucosa, resulting in dysentery. Shigella species and Campylobacter species are the main organisms following this mechanism. 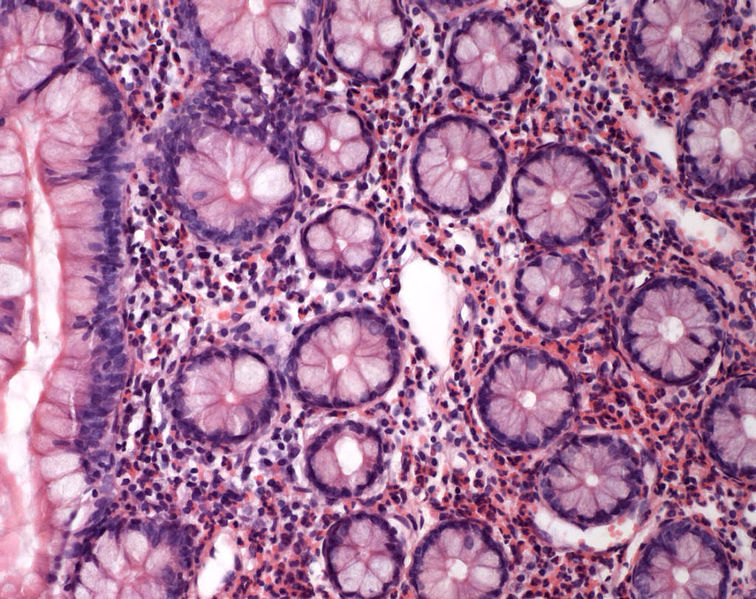 Bacterial gastroenteritis can be caused by several serotypes of salmonella, but the commonest ones are S. enteritidis and S. typhimurium. These organisms are commensals found in the bowel of livestock and in the oviducts of chicken. They are transmitted to humans through contaminated food and water. The typical symptoms of the disease consist of nausea, cramping type abdominal pain, diarrhea and sometimes fever. Diarrhea can be either profuse or watery, and it can advance into bloody dysentery syndrome. Within 3-6 days, the spontaneous resolution of these symptoms may occur. Although Salmonella gastroenteritis is a minor illness, young children and elderly are at a high risk of significant dehydration.

C.jejuni is a commensal living in the GIT of many species of livestock such as poultry and cattle. It is a common cause of childhood gastroenteritis in developing countries. Undercooked meat, contaminated milk products, and water are the most common sources of C. jejuni borne gastroenteritis. Symptoms of the disease usually include abrupt onset of nausea, diarrhea, and severe abdominal cramps. Some patients can have invasive hemorrhagic colitis. This infection is self-limiting and usually resolves within 3-5 days.

Clinical syndrome occurring in gastroenteritis can be divided into 2 main domains as watery diarrhea (usually due to enterotoxins or adherence) and dysentery (usually due to mucosal invasion and damage). The overlap between the 2 syndromes can occur with some pathogens like Campylobacter jejuni.

Untreated diarrhea has a high mortality rate due to dehydration in children in low-income countries. In developing countries, death and serious morbidity are less common. It is important to remember that the mainstay of treatment for all types of gastroenteritis, is oral rehydration solutions.

What are the Similarities Between Food Poisoning and Gastroenteritis?

What is the Difference Between Food Poisoning and Gastroenteritis?

Difference Between Gastritis and Gastroenteritis

Difference Between Addiction and Dependence

Difference Between Whooping Cough and Croup 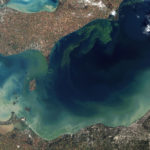