Geometric isomers are a type of stereoisomers. This type of isomers results, when molecules have a restricted rotation, basically, due to a double bond. When there is a single carbon – carbon bond, the rotation is possible. Therefore, however we draw the atoms, their arrangement will be the same. But when there is a carbon – carbon double bond, we can draw two arrangements of atoms in a molecule. The resulting isomers are known as cis, trans isomers or E-Z isomers. In cis isomer, same types of atoms are in the same side of the molecule. But in trans isomer, same types of atoms are in the opposite side of the molecule. For example, the cis and trans structures for 1,2-dichloroethane are as follows.

For a molecule to have geometric isomers, it is not only sufficient to have a double bond only. The two atoms or groups attached to one end of the double bond should be different. For example, following molecule doesn’t have geometric isomers, both atoms at the left hand end are hydrogens. Because of that, if we draw it in either cis or trans, both molecules are the same.

But it doesn’t matter if the all four attached groups or atoms are different. In that occasion, we can name them as E or Z.

Difference Between Isomers and Resonance

Difference Between PVD and CVD 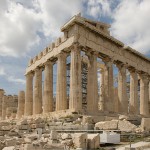