What is Interval Scale?

All quantitative attributes can be measured in interval scales. Measurements belonging to this category can be counted, ranked, added, or subtracted to take the difference, but it does not give any sense to take the ratio between two measurements.

A good example of this category is the measurements made in the Celsius scale. The temperatures inside an air conditioned room and the surroundings can be 160 C and 320 C. It is reasonable to say the temperature outside is 160 C higher than inside, but it is true to say that outside is twice as hot as inside, which is obviously incorrect thermodynamically. The selection of the reference point for measurements is considered as zero, which is the freezing point of water; being not free of thermal energy does not allow the two measurements to be compared as multiples.

The zero point in the interval scale is arbitrary, and also negative values are also defined. The variables measured on an interval scale are known as ‘interval variables’ or ‘scaled variables’. It is common for these measurements to carry units. As pointed out earlier the ratios between measurements on interval scales are not meaningful. Therefore, the multiplication and division cannot be directly performed, but has to be done after a transformation.

The mean, mode, and median can be used as measures of central tendency for the interval variables. For measures of dispersion, range, quantiles, and standard deviation can be used.

What is Ratio Scale?

An interval scale with a true zero point can be considered as a ratio scale. The measurements in this category can be counted, ranked, added, or subtracted to take the difference. Also, these values can be multiplied or divided, and the ratio between two measurements makes sense. Most measurements in the physical sciences and engineering is done on ratio scales.

A good example is the Kelvin scale. It has an absolute zero point, and multiples of measurements make perfect sense. Taking the statement from the previous paragraph, if the measurements are made in Kelvins, it is reasonable to say it’s twice as hot outside (this is only for comparison; truly, it is really difficult to make this statement, unless you are in space).

The variables measured on a ratio scale are known as ‘ratio variables’ and all the statistical measure of central tendency and dispersion can be obtained.

What is the difference between Interval and Ratio Scale?

• A measurement scale that has no absolute zero, but an arbitrary or defined point as the reference, can be considered as an interval scale. The zero point actually does not represent a true zero, but considered to be zero.

Difference Between Fraction and Ratio 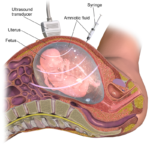