Gold is a metal that is shiny and soft. It is known for its malleability and ductility in its pure form. On the other hand iron is not malleable and ductile to a great extent when compared to gold. Both are available of course as solids.

Iron is chemically very active whereas gold is chemically inactive for that matter. It only means that gold resists individual acids but it can be attacked by the acid mixture aqua regia. The mixture is called so because of its power of dissolving gold. The density of gold is 19.03 grams per cubic centimeter. On the other hand the density of iron is 7.87 grams per cubic centimeter.

It is interesting to note that iron is the sixth abundant element in the whole of the universe. Gold on the other hand has a great storage value than iron.

Difference Between Metals and Non-metals 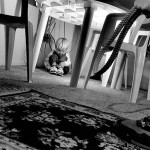