The key difference between kaolin and bentonite clay is that the kaolin clay forms as a result of weathering of aluminium silicate minerals such as feldspar whereas the bentonite clay forms from volcanic ash in the presence of water. Kaolin refers to a mineral that is rich with kaolinite.

Both kaolinite and bentonite are clay types. And, both these minerals have many different applications, chiefly in the production of skin care products. Also, both these forms fall under the category of phyllosilicates. Phyllosilicates are silicate minerals, which have layers or sheets of silicates.

What is Kaolin Clay?

Kaolin is a clay that is rich with kaolinite mineral. This mineral is an industrial mineral because there are many applications of this mineral in various industries. Thus, the general chemical composition of this mineral is Al2Si2O5(OH)4. Moreover, it falls under the category of phyllosilicates because it has sheets of silicates. However, there are alternative silicate sheets, which consist of tetrahedral silica sheets and octahedral sheets of alumina; one silica sheet links to an octahedral alumina sheet via an oxygen atom. 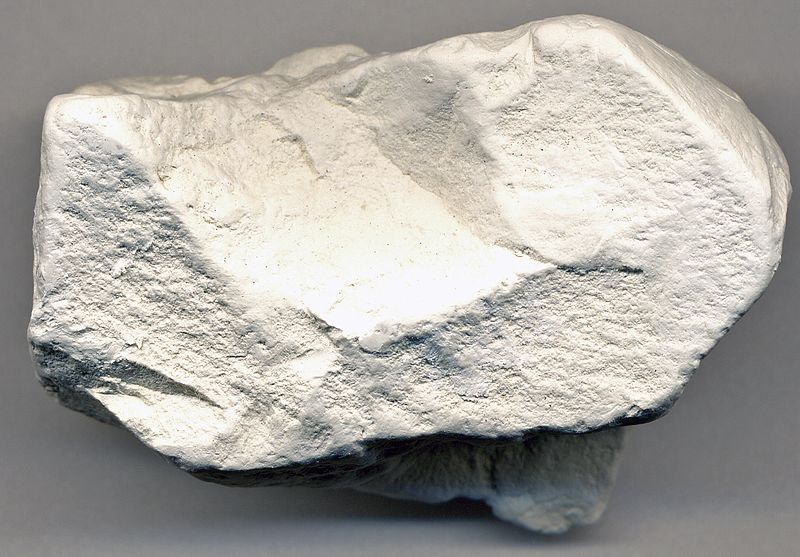 Kaolin has the low shrink-swell capacity and a low cation exchange capacity. Moreover, it is a soft clay that is earthy and usually white. This clay forms from the weathering of aluminium silicate minerals such as feldspar. Most of the time, we can find it in nature in a pink-orange or red color due to the presence of iron oxide with the mineral. When its commercial grade, we can transport kaolin in the form of dry powder, semi-dry noodle or as a liquid slurry.

The crystal structure of this mineral is triclinic. The streak color of the mineral is also white. When considering the structural transformations of this mineral, it can undergo a series of phase transitions upon heat treatments (at the atmospheric pressure).

What is Bentonite Clay

Bentonite is a form of mineral that mainly consists of montmorillonite. It falls under the category of phyllosilicates. More precisely, it is an absorbent aluminium phyllosilicate clay. There are several types of this mineral. We name them considering the dominant chemical element present in that mineral. The dominant elements usually include potassium, sodium, calcium, aluminium, etc. Then we can name the mineral as sodium bentonite, potassium bentonite, etc. However, the sodium and calcium forms are the most important forms for industrial purposes.

Usually this mineral forms from volcanic ash. It forms, most of the times, in the presence of water. More importantly, sodium bentonite expands when wet. It can absorb water several times more than its dry mass. It has excellent colloidal properties. Therefore, it is useful in drilling mud for oil and gas wells. When considering calcium bentonite, it is an important adsorbent of ions in solutions.

In addition to that, we can use this mineral in skincare products; because it can remove toxins from our skin. It is mild; thus, we can use it for sensitive skin types as well. While it is removing the toxins, it also leaves healing minerals, which our skin can absorb.

What is the Difference Between Kaolin and Bentonite Clay?

Moreover, Kaolin consists of tetrahedral silica sheets and octahedral sheets of alumina; one silica sheet links to an octahedral alumina sheet via an oxygen atom. However, Bentonite contains three alternating layer structure which has a central octahedral alumina sheet and two tetrahedral silica sheets. As the main difference between kaolin and bentonite clay, we can take their formation; Kaolin forms as a result of weathering of aluminium silicate minerals such as feldspar whereas Bentonite forms from volcanic ash in the presence of water.

The below infographic presents the difference between kaolin and bentonite clay in tabular form. 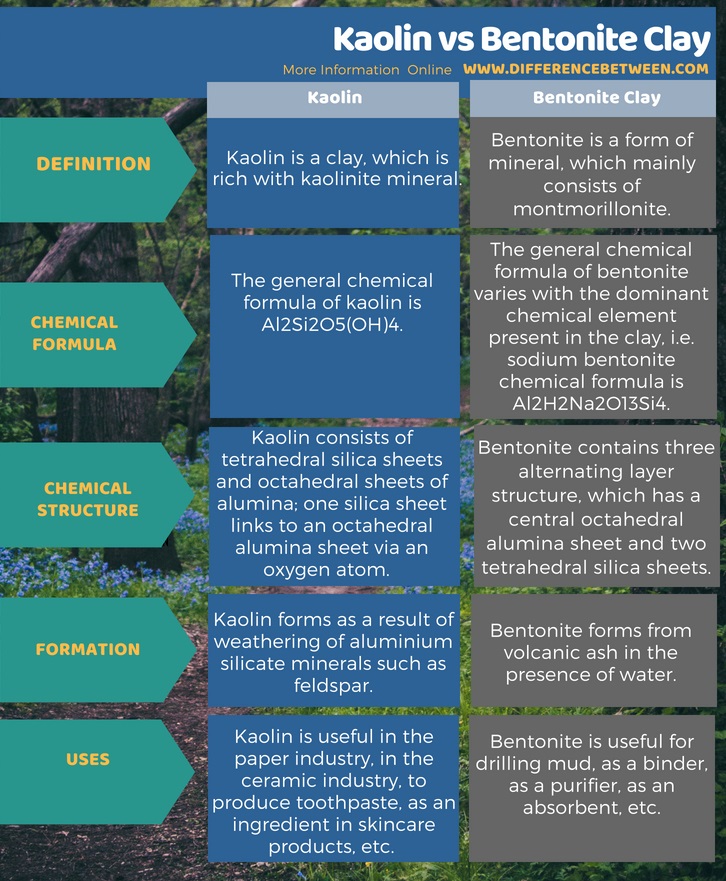 Kaolin and bentonite are two forms of clays that are rich with aluminium and silica minerals. The difference between kaolin and bentonite clay is that Kaolin forms as a result of weathering of aluminium silicate minerals such as feldspar whereas Bentonite forms from volcanic ash in the presence of water.

Difference Between Alkaline and Lithium Batteries

Difference Between Gypsum and Plaster of Paris 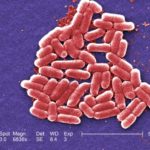 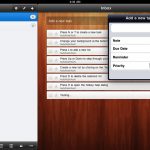