Onion is one vegetable that is an integral part of kitchens around the world. It is used both as a vegetable and also eaten raw in the form of salad. It has a pungent smell but used in cooking, to add to the flavor and aroma of many different types of food recipes. There are many different types of onions with green onions being very popular in European and Chinese cuisine. There is another variety called leek that confuses many because of its similarities with green onions. However, despite similarities, there are subtle differences also that prevent leeks being substituted with onions in many recipes.

Onion is a flowering plant belonging to the genus Allium that also contains garlic and leek. It is the edible bulb of onion plant that is used universally in cooking or as raw vegetable. Even the stem and the leaves of onion plant are used in cooking in many parts of the world. The most common and popular type of onion around the world is the red onion that is also called common onion. Onion bulb is known for its health benefits to human beings. It is anti-inflammatory, reduces cholesterol levels, and also has antioxidant properties. However, most people love it to consume onion bulb because of its taste and aroma. The paste of onion bulbs is used to thicken curries and to add to the flavor. The characteristic feature of red onion is its multilayered structure. It has a pungent smell and brings tears to the eyes of a person who cuts it into pieces.

One of the varieties of onions is green onion or scallion that is known by different names such as spring onions, baby onions, salad onions, gibbons, etc. These varieties have smaller bulbs that are not fully developed. The leaves are hollow from inside and are edible. These varieties are milder than red onions and used cooked as well as raw.

Leek is a plant that belongs to the family of genus Allium. It is a symbol of Wales and Welsh leeks are very popular all over Europe for their taste and aroma. Leek is a plant that does not produce a strong bulb and has long leaves that are cylindrical and crunchy to eat. People mistakenly refer to the heath of leaves as the stem of this plant. The part of these leaves that is just above the root or the bulb and is light green in color is edible though people also consume the hard and dark green part of the leaves of leeks too.

• Both green onions, as well as leeks, are part of the same onion family, but leeks are larger and are milder in taste and aroma than green onions.

• It is harder to cook the leaves of leeks while green onion leaves can be easily cooked.

• Green onion leaves can be eaten raw, but leeks require to be cooked before consumption.

• One has to blanch the leaves of leeks as mud and dirt hides in between its leaves.

• It is the light green part of the leaves of leeks that are edible.

• Welsh leeks are very popular, and the vegetable is a national symbol of the country.

Difference Between Shallots and Spring Onions

Difference Between Leeks and Green Onions

Difference Between Banana and Plantain 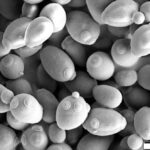