The key difference between leptons and quarks is that leptons can exist as individual particles in nature whereas quarks cannot.

Until the 20th century, people believed that atoms are indivisible, but the 20th century physicists discovered that the atom can be broken into smaller pieces, and all atoms are made of different compositions. Therefore, we call them subatomic particles: namely, the proton, neutron and electron. Furthermore, investigations reveal that subatomic particles also have internal structure, and made of smaller things. Thus, these particles are known as elementary particles, and Leptons and Quarks are their two main categories.

1. Overview and Key Difference
2. What are Leptons
3. What are Quarks
4. Side by Side Comparison – Leptons vs Quarks in Tabular Form
5. Summary

Particles that we call electrons, muons (µ), tau (Ƭ) and their corresponding neutrinos are known as the family of leptons. Furthermore, electron, muon, and tau have a charge of -1, and they differ from each other only from the mass. That is; the muon is three times more massive than the electron, and tau is 3500 times larger than the electron. Moreover, their corresponding neutrinos are neutral and relatively massless. The following table summarizes each particle and where to find them.

Besides, the stability of these heavier particles directly relates to their masses. Therefore, massive particles have a shorter half-life than the less massive ones. The electron is the lightest particle; that is why the universe is abundant with electrons, and the other particles are rare. To generate muons and tau particles, we need a high level of energy. In the present day, we can see them only in instances where there is a high energy density. Furthermore, we can produce these particles in particle accelerators. In addition, leptons interact with each other by electromagnetic interaction and weak nuclear interaction. For each lepton particle, there are anti-particles we name as antileptons. And, these anti-leptons have similar mass and opposite charge. For example, the anti-particle of the electrons are positrons.

Quark is the other major category of elementary particles. We can summarize the properties of particles in the quark family as follows. (The mass of each particle is below the name itself. However, the accuracy of these numbers is highly debatable).

Quarks interact strongly with each other by strong nuclear interaction to form combinations of quarks. These combinations are known as Hadrons. In fact, isolated quarks do not exist in our universe at present. Moreover, it is reasonable to say that all the quarks in this universe are in some form of hadrons. (Most common and known types of the hadrons are protons and neutrons). 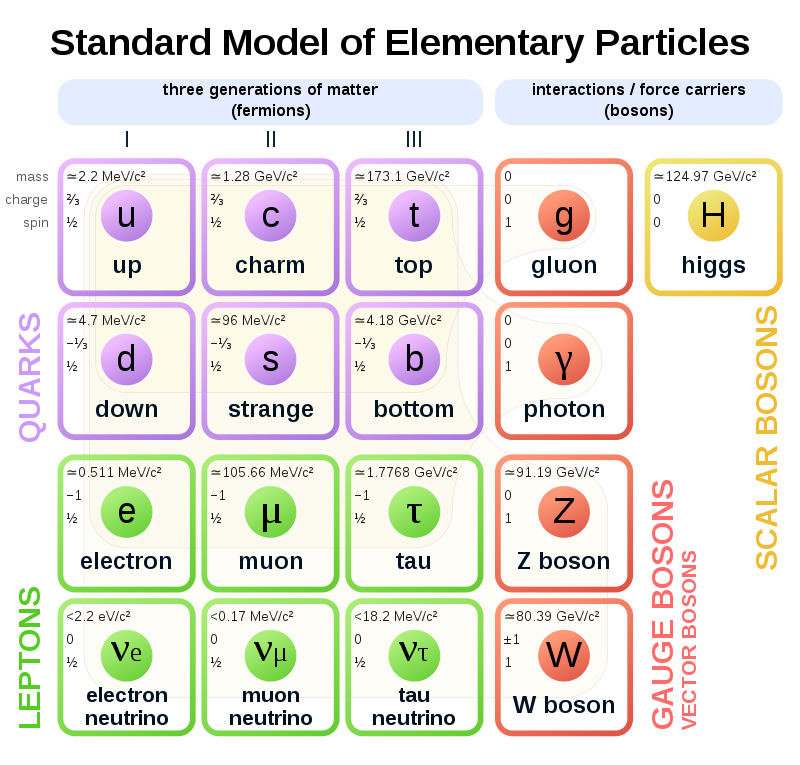 Moreover, quarks have another property called the flavour. A number is assigned to denote the flavour of the particle known as the flavour number. The flavours are referred to as Upness (U), Downness (D), Strangeness (S) and so on. The up quark has an upness of +1 while 0 strangeness and Downness.

What is the Difference Between Leptons and Quarks?

Electrons, muons (µ), tau (Ƭ) and their corresponding neutrinos are known as the family of leptons while quarks is a type of elementary particle and a fundamental constituent of matter. When comparing both, the key difference between leptons and quarks is that leptons can exist as individual particles in nature whereas quarks cannot. 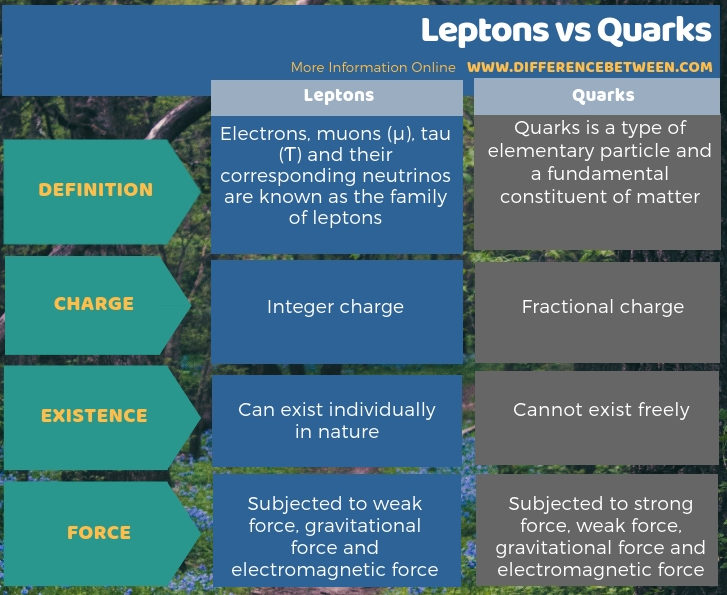 In brief, quarks and leptons are two categories of the elementary particles. When taken together, they are known as fermions. Above all, the key difference between leptons and quarks is that leptons can exist as individual particles in nature whereas quarks cannot.

Difference Between Actinides and Lanthanides