If you are an enthusiastic observer of world politics, you need to know the difference between liberal and conservative to enhance your knowledge. There are many philosophies and definitions about the types of thinking of people and their views towards life and other things. Both liberals and conservatives have different views and affiliations towards different aspects of life and day-to-day interactions. Liberals and conservatives have different ideas, perspectives and views on political, social and economical aspects. Liberal and conservative ideologies are two different ideologies that exist in our society and have been there since the start of the society. Let us take a look at what these values exactly depict and what these values exactly are.

What does Liberal mean?

Being liberal means being free and having personal rights and equal rights. A person who is liberal is someone who is free to ideas and open to new ideas to progress. A liberal person focuses on individual rights and is considered to be pretty broad minded. A liberal person is independent, does not demand control on others, and are very optimistic. Liberals favour more of public sectors and hold of government. Liberals have a very democratic view towards political issues. Liberals think that the society is a collective responsibility of the government.

What does Conservative mean?

People who have conservative values and believes, are those who are very traditional and do not like much change in the routines that are being followed since ages. They value their principles, actions and habits and believe in individual responsibility. Conservatives favour more of private sectors and minimum government interference. Conservatives are inclined towards the socialism and communism point of political governance. Conservatives believe that everyone is responsible for themselves and their betterment lie in their own hands. Conservatives are not too keen on sudden, rapid and big changes and are considered to be of classical views.

What is the difference between Liberal and Conservative? 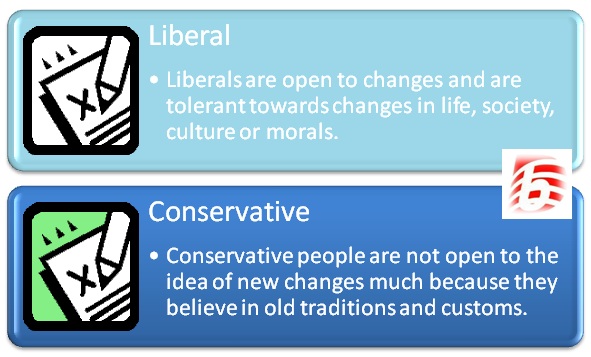 • Liberals are not authoritative or authoritarians; they do not want to take charge or control of others.

• Liberals are not orthodox or traditional and they are open to changes and are tolerant towards changes in life, society, culture or morals.

• Whereas conservative people are not open to the idea of new changes much because they believe in old traditions and customs. They have firm believes in their traditional norms and values and have a strong believe in religion and faith.

The values, beliefs and viewpoints are totally different from each other but still liberal and conservative coexist in the society side by side. Everyone is entitled to freedom of views and express what they believe in and act upon them.