The key difference between male and female Ascaris is that the male ascaris possesses pre-anal and post-anal papillae, but female ascaris does not possess any of these structures.

Ascaris is a genus of roundworms. They are found in almost any type of habitat including marine, freshwater or land. Also, they are pathogenic when ingested by humans, horses, and pigs. Furthermore, Ascaris lumbricoides lives in humans while Ascarissuum lives in pigs. Besides, they are dioecious. Hence, they have a separate male and a female worm.

Even though the male and female Ascaris worms look similar, there are several key differences between them, both externally and internally. Externally, the two sexes differ from each other by size and the presence or absence of external organs. Internally, they differ by their reproductive organs. The adult Ascaris worm appears in creamy white or pinkish in color with a cylindrical shape. The body wall of these worms constitutes of cuticle, epidermis, and musculature. In addition, they contain a pseudocoelom (a false body cavity) that is not lined by epithelium. Ascaris worms respire by simple diffusion. Moreover, their nervous system contains a nerve ring with many longitudinal nerve cords. More importantly, they reproduce only through sexual reproduction.

What is a Male Ascaris?

Male Ascaris is the male worm of genus Ascaris. The male version of the worm is thin and short. It grows to an average length of 15-30cm. In appearance, Ascaris males are hooked. In the posterior opening of these worms, they possess pineal spicules or sine-like extensions. These structures are present near the posterior opening. 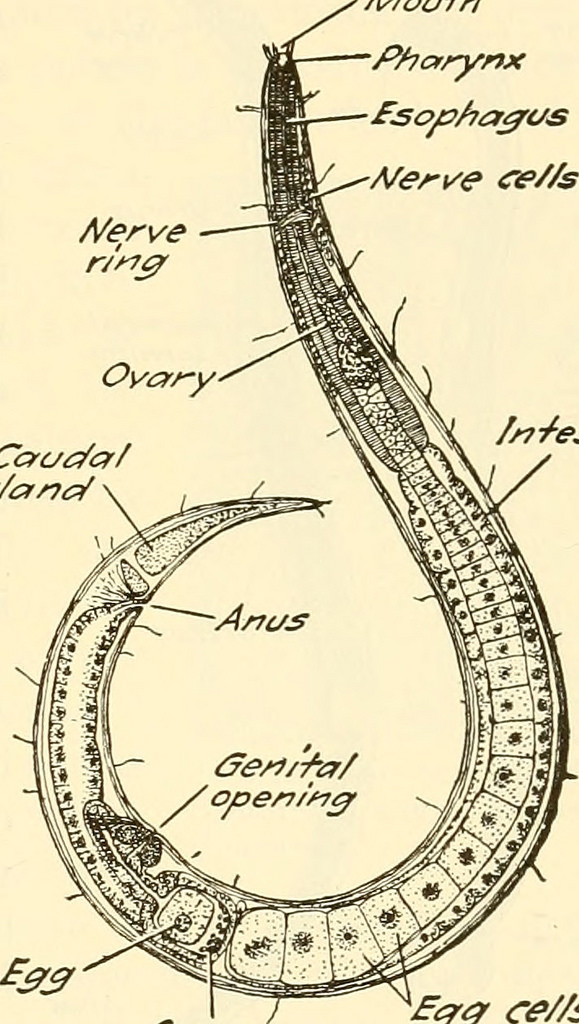 What is a Female Ascaris?

Female Ascaris is the female worm of genus Ascaris. They are wider, long and straight when compared to male Ascaris. Female Ascaris grow to be 20-40cm long. Unlike male Ascaris, female Ascaris does not contain any pineal spicules or papillae in their posterior opening. But they have a reproductive opening on the posterior third of the body. 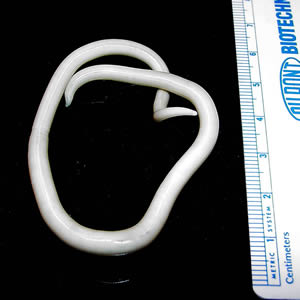 When examining a female Ascaris, they contain tube-shaped reproductive organs in the posterior region of the body cavity. Here, two tubes join together to form a “Y,” shaped structure. In males, it is just a straight single tube.

What are the Similarities Between Male and Female Ascaris?

What is the Difference Between Male and Female Ascaris?

Below infographic provides more details on the difference between male and female Ascaris. 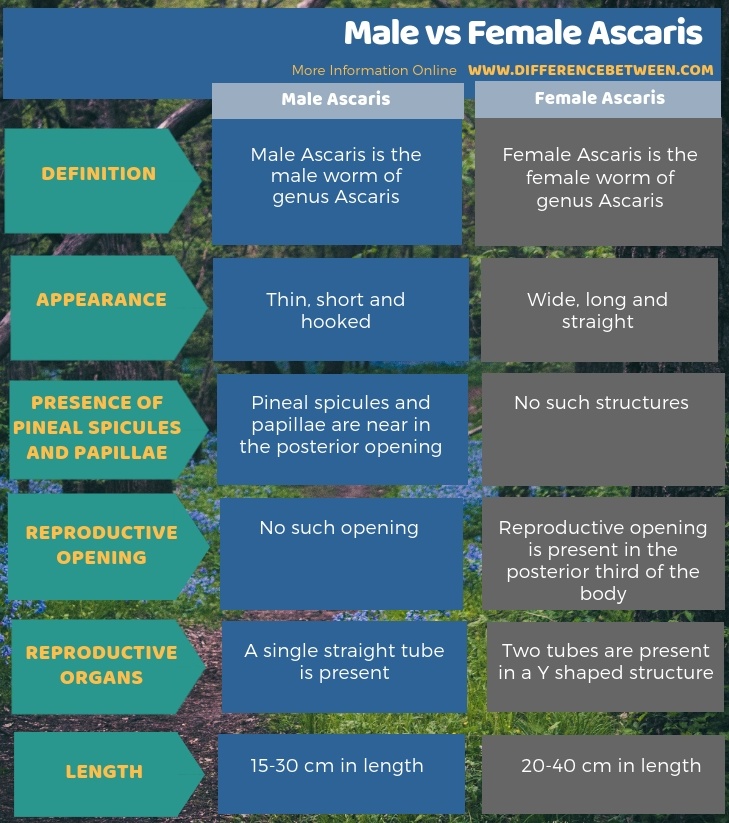 Ascaris is a genus of roundworms. They are dioecious. Hence, Ascaris has both male and female sexes. These roundworms exist in many different habitats. Moreover, they are cylindrical in shape. The male worm is short and thin while the female worm is long and wide. The key difference between male and female Ascaris depends on the structures present in their posterior opening. Male worm possesses spicules and papillae whilst the female worm does not. However, they both have reproductive organs since they reproduce through sexual reproduction.

Difference Between Excretion and Osmoregulation 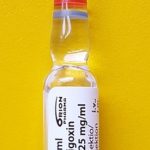 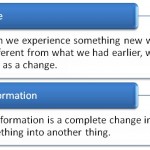 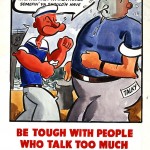 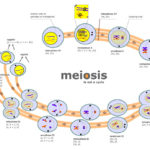