In the early 1870s, a Russian chemist named Vladimir Markonikov derived a rule based on a series of empirical observations. The rule was published as the Markovnikov’s rule. The Markovnikov’s rule helps to predict the resulting formula of alkane, when a compound having the general formula of HX (HCl, HBr or HF) or H2O is added to an asymmetric alkene (such as propane). It is possible to reverse the minor and major products when the reaction conditions are changed, and this process is referred to as Anti-Markovnikov addition. The key difference between Markovnikov rule and the anti-Markovnikov rule is explained below.

What is Markovnikov Rule?

The definition of Markovnikov rule is, when the addition of protic acid with the formula of HX (where X= halogen) or H2O (considered as H-OH) to an alkene, hydrogen attaches to the double bonded carbon with the greater number of hydrogen atoms, while the halogen (X) attaches to the other carbon. Therefore, this rule is often interpreted as ‘the rich get richer’. The rule can be illustrated using the reaction of propene with hydrobromic acid (HBr) as follows.

Figure 01: Markovnikov’s Rule is illustrated by the reaction of Propene with Hydrobromic Acid

The mechanism of the addition of HX to an alkene can be explained in two steps (See fig 02). First, the addition of a proton (H+) is taken place as the C=C double bond of alkene reacts with H+ of HX (in this case it’s HBr) to form a carbonation intermediate. Then reaction of an electrophile and a nucleophile is taken place as the second step to form a new covalent bond. In our case, Br– reacts with carbonation intermediate which is positive in charge to form the final product. 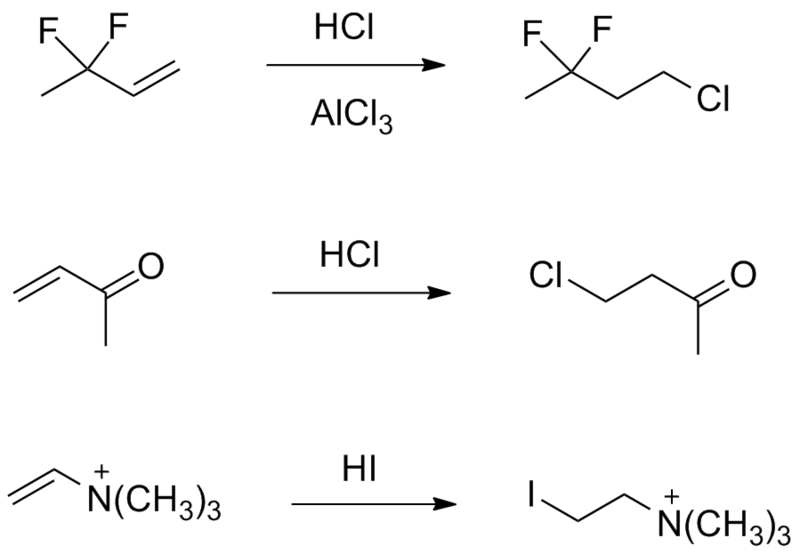 During the final step, the more stable bromoalkyl free radical reacts with HBr forming anti-Markovnikov product plus another bromine free radical, which continuous the chain reaction. Unlike HBr, HCl and HI do not result in anti-Markovnikov products as they do not undergo free radical addition reaction. It is because H-Cl bond is stronger than H-Br bond. Even though H-I bond is much weaker, the formation of I2 is more preferred as C-I bond in relatively unstable.

Markovnikov and anti-Markovnikov are two types of addition reactions occurring between HX (HBr, HBr, HI and H2O) and alkenes. Markovnikov reaction occurs when the addition of HX to an alkene, where H bonds to less substituted carbon atom of the double bond, while X bonds to the other double bonded carbon atom through an ionic mechanism. The anti-markovnikov reaction takes place when HBr (not HCl, HI or H2O) is added to an alkene, where Br bonds to less substituted double-bonded carbon, while H bonds to the other carbon atom, through a free radical mechanism. This is the difference between Markovnikov and Anti-Markovnikov Rule.

You can download PDF version of this article and use it for offline purposes as per citation note. Please download the PDF version here Difference Between Markovnikov and Anti Markovnikov Rule

Difference Between Allylic and Vinylic Carbons

Difference Between Polymer and Copolymer