The key difference between meniscus and ligament is that meniscus is a C-shaped piece of cartilage that cushions and stabilizes the knee joint while ligament is a fibrous connective tissue that joins a bone to other bones.

1. Overview and Key Difference
2. What is Meniscus
3. What is Ligament
4. Similarities Between Meniscus and Ligament
5. Side by Side Comparison – Meniscus vs Ligament in Tabular Form
6. Summary

Meniscus (plural menisci) is a C-shaped piece of cartilage present in the knee. It cushions and stabilizes the knee joint. Menisci act mainly as shock absorbers. It is located between the thighbone (femur) and shinbone (tibia). There are two menisci in each knee joint. They are medial meniscus and lateral meniscus. 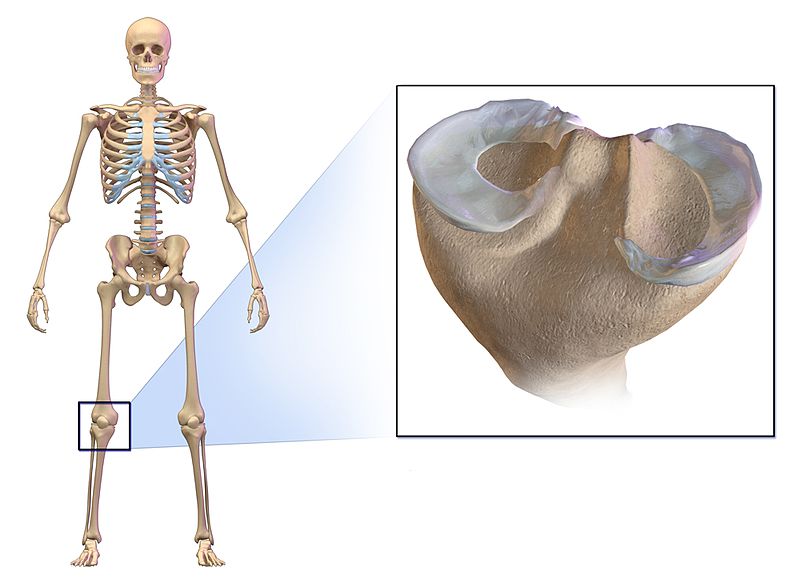 Menisci can be damaged during activities such as twisting the knee forcefully, putting your full body weight on them, sudden stops and turns, and lifting something heavy, etc. which put pressure on them. Some sports, like football, basketball, and tennis, which require sudden stops and turns, can also cause torn meniscus. Torn meniscus is a common knee injury which causes pain, swelling and stiffness. Sometimes, torn meniscus heals with time due to medication. In other cases, it requires surgical repair. Moreover, menisci become weak with age.

Ligament is a flexible and fibrous connective tissue that joins a bone to another bone in order to stabilize bones. Ligaments have collagen fibers arranged in parallel bundles. Moreover, ligaments support internal organs and hold bones together in proper articulation at the joints. Furthermore, ligaments limit the joint’s movements. Ligament appears as a tough crisscross band. They are similar to tendons that attach bones to muscles. Ligaments are found joining most of the bones in the body. The human body has about 900 ligaments. Similar to menisci, ligaments are also to subject to injuries. Knee ligaments and ankle ligaments are the most common torn ligaments. Moreover, ligaments in the shoulder are frequently subject to injuries. 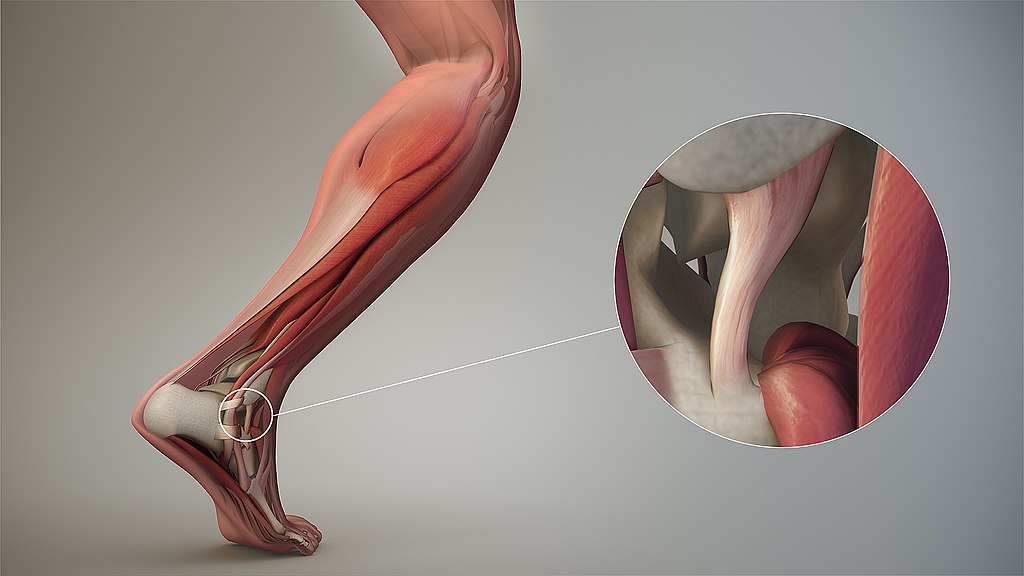 What are the Similarities Between Meniscus and Ligament?

What is the Difference Between Meniscus and Ligament?

Meniscus is a C-shaped piece of cartilage that stabilizes the knee joint while ligament is a tough fibrous connective tissue that joins a bone to another bone. So, this is the key difference between meniscus and ligament. Menisci are found mainly in the knee joint. They are found in the wrist, acromioclavicular, sternoclavicular, and temporomandibular joints. Ligaments are found in most of the joints in our body.

Moreover, another significant difference between meniscus and ligament is their function. Menisci act as shock absorbers, and they stabilize knee joint while ligaments connect bones to other bones to form joints.

Below infographic tabulates the differences between meniscus and ligament. 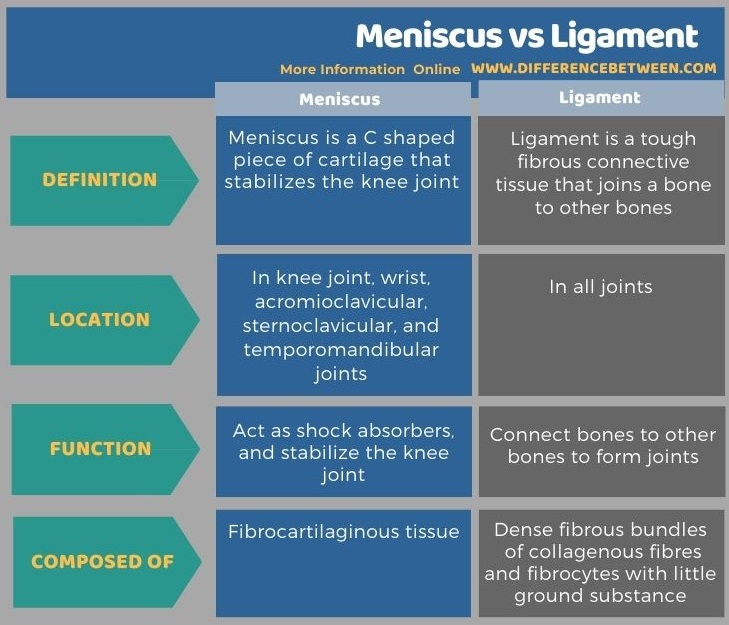 Meniscus is a C shaped cartilage in the knee joint. There are two menisci in each knee joint. They are composed of fibrocartilaginous tissue. Menisci cushion and stabilize the knee joint. Ligament is a tough fibrous band of connective tissue composed of dense bundles of collagenous fibres and fibrocytes with little ground substance. Ligaments join bone to other bones and hold bones together in proper articulation at the joints. Both menisci and ligaments are soft fibrous tissues. Thus, this summarizes the difference between meniscus and ligament.

Difference Between Peristalsis and Segmentation

Difference Between Male and Female Sacrum

Difference Between Villi and Alveoli

Difference Between Cardiac and Pyloric Sphincter