1. Overview and Key Difference
2. What is Niger
3. What is Nigeria
4. Similarities Between Niger and Nigeria
5. Side by Side Comparison – Niger vs Nigeria in Tabular Form
6. Summary

Niger, officially known as the Republic of Niger, is a country in Western Africa, which has been named after the Niger River. It is a landlocked country surrounded by Libya, Chad, Nigeria, Benin, Burkina Faso, Mali, and Algeria. Niger is the biggest country in the West Africa with a land area of almost 1,270,000 km2. However, about 80% of its land area lies in the Sahara desert.

The official language of Niger is French, which is an inheritance from the French colonial period. At the same time, there are also eight national languages, which are associated with different tribes. The religion of the majority of the population in Niger is Islam. Nevertheless, Niger is a secular state. 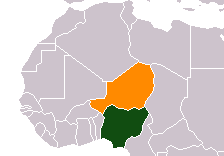 Although Nigeria has been home to a number of kingdoms and tribal states, it underwent a British colonial rule in the 19th century. It gained independence from the British and became an independent state in 1960. The official language of Nigeria is English. However, there are about 500 different languages used in this country, Hausa, Igbo, and Yoruba being the major three languages.

Nigeria has a large population. This is the most populous country in Africa and the seventh most populous country in the world. Roughly half the population is Christians while the other half is Muslims. There is also a minority of people of who practice tribal religions. Nigeria also has Africa’s largest economy. The World Bank considers Nigeria to be an emerging market. Nigeria is referred to as the “Giant of Africa” due to this large economy and population.

What are the Similarities Between Niger and Nigeria?

What is the Difference Between Niger and Nigeria?

Niger and Nigeria are neighboring countries in West Africa. Both countries have been home to historical kingdoms and tribal states before being colonized by European nations. Today, Nigeria is the most populous country in Africa and has the largest economy. Niger, on the other hand, is a developing country with a poor economy. This is the main difference between Niger and Nigeria.

Difference Between Sudan and South Sudan

Difference Between OAU and AU

Difference Between Africa and South Africa