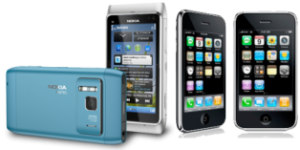 Both Nokia N8 and the Apple iPhone are mighty warriors in their own takes, the iPhone as the king of all smart phones and Nokia N8, the Nokia of all Nokias! Nothing more needs to be said to introduce the two phones. The task for any one making the choice of selecting out of the two becomes tedious as both the phones have multiple applications to keep the users affixed. It then comes to probably basing the decision on a coin toss since the Nokia N8 and Apple iPhone are close contenders.

The Nokia N8 is a mystical device that incorporates features probably not dreamt to have been present in a phone. The Nokia N8 boasts a 12 mega pixel camera and 720p video recording capability. The N8 also has touch screen features using the Symbian 3 operating system, however the criticism remains that all features present together in the phone compromise the basic features of the phone. The N8 is available in a wide range of colors accentuating the curvy exterior of the phone. The best feature that makes N8 “the” portable device is its scratch resistant screen.

Apple shook up the market with its iPhone. Those who did not live in the US when it was initially launched got their unlocked iPhones shipped to their respective countries to quench their addiction. The iPhone has the highest resolution amongst all smart phones giving a crystal clear display to users and also allows a multitasking interface. The iPhone has a two way 5 mega pixel camera giving way to high resolutions photos and self portraits. Apples several applications are incorporated into the iPhone so an iPhone can also be an iPod for the music lovers and an iBook for the book lovers

The Nokia N8 is available in various metallic colors which come with scratch resistant screens whereas the iPhone is the slimmest of all smart phones present in the portable device arena, available in signature black and white colors of Apple.

The significance difference between the two is in the camera application where Nokia N8 beats the iPhone hands down with its 12 mega pixel, two microphones, and high resolution results compared to iPhone’s 5 mega pixel camera. Both phones have two way cameras and therefore allow for video phone chat. However, iPhone’s user friendly operating system wins the race as Nokia N8’s Symbian 3 complicates the usage of the communication device.

The Nokia N8 also has easy connectivity to exterior devices like televisions where the TV can be plugged to the phone so that videos can be viewed on a bigger screen.

Both N8 and the iPhone provide for comparable and competitive features, however the bottom line decision stands with the user’s preference especially if they are hardcore Nokia enthusiasts or addicted to Apple’s technology. The hype that surrounded the iPhone could not be mastered by the competitors; however, dark horses like the Nokia N8 will give a little fight to the maestro. 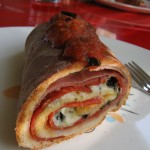 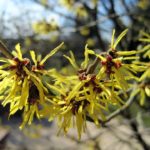