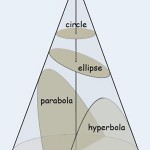 A section is a surface or the outline of that surface formed by cutting a solid figure with a plane. If the solid figure happens to be a cone, the resulting curve is called a conic section. The kind and shape of the conic section is determined by the angle of intersection of the plane and the axis of the cone. When the cone is cut at right angles to the axis, we get a circular shape. When cut at less than a right angle but more than the angle made by the side of the cone results in an ellipse. When cut parallel to the side of the cone, the curve obtained is a parabola and when cut nearly parallel to the axis that to the side, we get a curve known as hyperbola. As you can see from the figures, circles and ellipses are closed curves whereas parabolas and hyperbolas are open curves. In the case of a parabola, the two arms eventually become parallel to each other whereas in the case of a hyperbola it is not so.

Since circles and parabolas are formed by cutting a cone at specific angles, all circles are identical in shape and all parabolas are identical in shape. In the case of hyperbolas and ellipses there is a wide range of angles between the plane and the axis which is why they tend to have a wide range of shapes. The equations of the four types of conic sections are as follows. 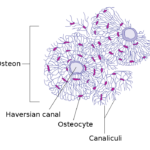 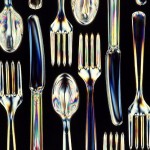 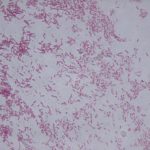