DNA replication is a natural process that occurs in living organisms. It involves the production of two identical copies of one DNA molecule. DNA replication is an extremely important process of biological inheritance. Genetic information is passed from parent to offspring mainly due to the ability of DNA replication. Hence, it is an essential process that occurs in almost all living organisms. This process occurs in vivo. However, DNA replication can be done via in vitro methods as well. Polymerase Chain Reaction (PCR) is one such in vitro method of DNA replication. PCR is a DNA amplification method performed in laboratories. It produces thousands to millions of copies of DNA from an interested DNA fragment or a gene. There are differences between in vivo DNA replication and PCR. The key difference between these two is that PCR is performed in a PCR machine at maintained temperatures to produce a large number of copies of DNA while DNA replication occurs inside the body at body temperature to produce two identical copies of a single DNA molecule.

Polymerase Chain Reaction (PCR) is an in vitro DNA amplification technique that is routinely performed in Molecular Biological laboratories. This method enabled the production of thousands to millions of copies of a particularly interested DNA fragment. PCR was introduced by Kary Mullis in 1980. In this technique, the interested fragment of DNA is served as the template for making copies. The enzyme called Taq polymerase is used as the DNA polymerase enzyme, and it will catalyze the synthesis of new strands of the DNA fragment. Primers that are in the PCR mixture will work as the starting points for the fragment extensions. At the end of the PCR reaction, many copies of the sample DNA can be obtained.

All the ingredients that are necessary to make copies of DNA are included in the PCR mixture. They are sample DNA, DNA polymerase (Taq polymerase), primers (forward and reverse primers), nucleotides (building blocks of DNA) and a buffer. PCR reaction is run in a PCR machine, and it should be fed with correct PCR mixture and the correct PCR program. If the reaction mixture and the program are correct, it will produce the required amount of copies of a particular section of DNA from a very small amount of DNA.

When primers are annealed with DNA, Taq polymerase enzyme initiates the synthesis of the new strands by adding nucleotides that are complementary to the template DNA. Taq polymerase is a heat stable enzyme that is isolated from a thermophilic bacterium called Thermus aquaticus. PCR buffer maintains the optimal conditions for the Taq polymerase action. These three stages of PCR reaction are repeated to produce the required amount of the PCR product. At each PCR reaction, the number of the DNA copy is doubling. Hence, an exponential amplification can be observed in PCR. PCR product can be observed using gel electrophoresis since it produces the visible amount of DNA on a gel and it can be purified for further studies such as sequencing etc. 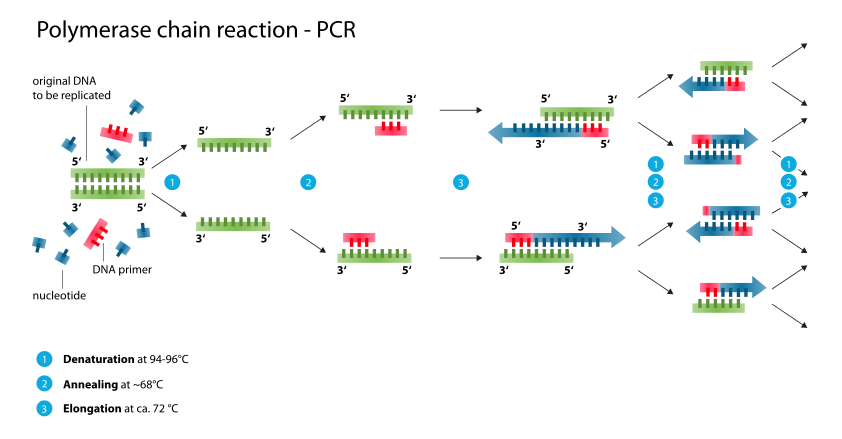 PCR is a valuable tool in medical and biological research. Especially in forensic studies, PCR has an immense value since it can amplify DNA for studies from the tiny samples of the criminals and make forensic DNA profiles. PCR is widely used in many areas of the Molecular biology including, genotyping, gene cloning, mutation detection, DNA sequencing, DNA microarrays and paternity testing etc.

What is DNA Replication?

DNA replication is referred to the process that produces two identical copies of DNA from one DNA molecule. It is an important process of biological inheritance. DNA replication occurs in all living organisms. The genome of the parent cell should be replicated in order to handover the genome into the daughter cell. DNA replication process has three main steps called initiation, elongation and termination. These steps are catalyzed by different enzymes. DNA replication starts from the location called origin of replication in the cells’ genome. In the genome, DNA exists in double-stranded form. These two strands are separated at the beginning of the DNA replication, and it is done by ATP dependent DNA helicase. The unwinding of DNA is the main event that occurs in the initiation step. By using separated DNA strands as templates, DNA polymerase synthesizes the new complementary strands of the template strands into 5’ to 3’ direction. This is the step called elongation. Termination occurs when the two replication forks meet with each other on the opposite end of the parental chromosome.

Other than DNA polymerase, several enzymes such as DNA primase, DNA helicase, DNA ligase and Topoisomerase are involved with the DNA replication. A special feature of the in vivo DNA replication is that it produces Okazaki fragments. One strand is continuously formed while the other forms in small pieces.

What are the Similarities Between PCR and DNA Replication?

What is the Difference Between PCR and DNA Replication?

Difference Between PCR and DNA Sequencing

Difference Between Male and Female Karyotypes 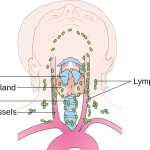