Peptic ulcer includes all ulcers occurring in the stomach and duodenum. Gastric ulcer is a type of peptic ulcer. There are two types of peptic ulcer. They are gastric ulcer and duodenal ulcer. There is much confusion in the proper usage of the terms peptic, gastric and duodenal ulcers. Duodenal ulcers are more commonly known as peptic ulcers. Gastric ulcers are called by the same name usually. There are certain similarities between the two entities. Gastric and peptic ulcers present the same, with upper abdominal burning pain, indigestion, chest pain, sweating. They can present as black, tarry stools due to bleeding from an ulcer. Both conditions are associated with stress, irregular dietary habits, excessive secretion of gastric juices, and Helicobacter pylori. Upper gastrointestinal endoscopy to visualize the alimentary canal up to the second part of the duodenum is the investigation of choice in both conditions. A small piece of the ulcer edge may be removed to examine under the microscope, to exclude cancers. Helicobacter pylori are associated with the chronic gastritis. Helicobacter pylori eradication treatment, antacids, and proton pump inhibitors are the available treatment options.

Gastric ulcer may occur due to excessive secretion of gastric juices combined with irregular dietary habits. There are three main meals of the day with two small snacks after breakfast and after lunch. Human body is conditioned to this regular regimen and gastric juices flow like clockwork at meal times even if nothing is in the stomach. Gastric juices help digest food. Secretion of gastric juices occurs in three phases. Cephalic phase starts when we feel hungry and when we see food. When we start eating the gastric phase starts and when food enters the small bowel the intestinal phase starts. When there is nothing in the stomach for the acidic stomach juices to act upon, the mucosal lining becomes its target. There are many protective mechanisms in the stomach to protect it against the highly acidic secretions. There is a thick mucus layer overlying the gastric lining cells. The acidity drops along the thickness of the mucus layer from highly acidic stomach cavity to a neutral pH at the gastric lining cells. There are many buffers to deactivate any stray acids. When there is a long standing starvation or irregular/ inadequate food intake, these protective mechanisms fail. Without this protection, acid destroys the stomach lining cells and an ulcer may be the end result. Gastric ulcers usually occur at the lesser and greater curvatures and at the pyloric area of the stomach. These ulcers are difficult to treat due to constant irritation by gastric acidity. Food may also reflux up the esophagus with chronic gastritis. With prolonged gastritis, the lining of the lower esophagus may change into a pre-cancer state. This is called Barette’s esophagus.

What is the difference between Gastric and Peptic Ulcers?

1. Difference Between Ulcer and Gastritis

2. Difference Between Ulcer and Cold Sore

3. Difference Between Ulcer and Acid Reflux

4. Difference Between Arterial and Venous Ulcers

Difference Between Ulcer and Acid Reflux 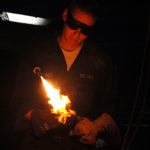