Peptidoglycan is a polymer comprising of sugars and amino acids that form a complex mesh-like coating outside the plasma membrane of most bacteria and some archaea thereby forming the cell wall. It is also known as murein. The sugar component comprises of interchanging residues of β-(1,4) linked N-acetylglucosamine and N-acetylmuramic acid. Attached to the N-acetylmuramic acid is an ether of lactic acid and N-acetylglucosamine and it is a peptide chain of three to five amino acids. This peptide chain is cross-linked to the peptide chain of another strand creating the 3D complex mesh-like structure. Peptidoglycan functions a structural role in the bacterial cell wall, providing structural integrity and strength, as well as responding the osmotic pressure of the cytoplasm. In addition to that, peptidoglycan is also contributed in binary fission during bacterial cell reproduction. Gram-positive bacteria have a substantially thicker peptidoglycan layer whereas Gram-negative bacteria have a very thin peptidoglycan layer. In other words, peptidoglycan creates around 90% of the dry weight of gram-positive bacteria but only 10% of gram-negative bacteria. Therefore, the presence of high levels of peptidoglycan is the primary determining factor of the gram-staining characterization of bacteria as Gram-positive. 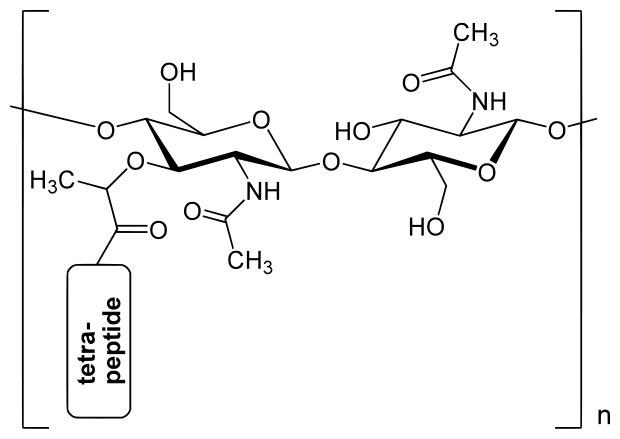 Muramic acid is an amino sugar originated in the peptidoglycan layer of the cell walls of many bacteria. Its chemical formula is C9H17NO7 and molar mass is 251.2. Its IUPAC systematic name is 2-{[3-Amino-2,5-dihydroxy-6-(hydroxymethyl)oxan-4-yl]oxy}propanoic acid. Based on the chemical composition, it is the ether of lactic acid and glucosamine. It occurs naturally as the N-acetylmuramic acid in peptidoglycan.However, the bacteria known as Chlamydiae are unusual for not containing muramic acid in their cell walls. 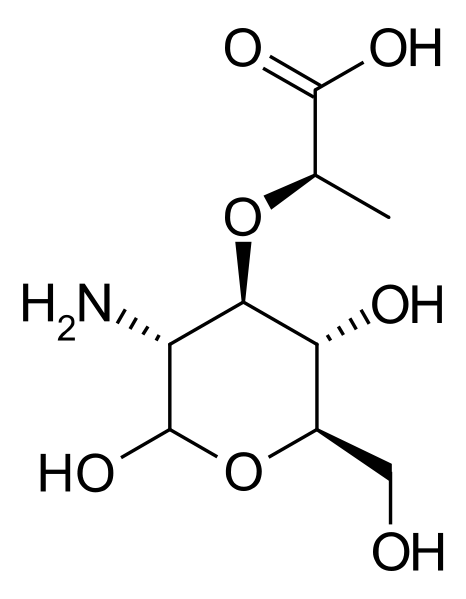 What is the difference between Peptidoglycan and MuramicAcid?

Peptidoglycan and muramic acid may have significantly different physical and functional characteristics. These can be categorized into following subgroups,

Definition of Peptidoglycan and MuramicAcid:

Peptidoglycan: A substance forming the cell walls of many bacteria, consisting of glycosaminoglycan chains interlinked with short peptides.

Muramic acid: An amino sugar. In chemistry, an amino sugar or a 2-amino-2-deoxysugar is a sugar molecule in which a hydroxyl group has been replaced with an amine group.

Characteristics of Peptidoglycan and MuramicAcid:

Peptidoglycan is a polymer.

Muramic acid is a monomer.

Peptidoglycan: It is a crystal lattice structure synthesized from linear chains of two alternating amino sugars, namely N-acetylglucosamine (NAG) and N-acetylmuramic acid (NAM). The interchanging amino sugars are connected via a β-(1,4)-glycosidic bond.

Muramic acid: It is the ether of lactic acid and glucosamine.

Peptidoglycan: Antibiotic drugs such as penicillin inhibit with the creation of peptidoglycan by binding to bacterial enzymes. This process is known as penicillin-binding proteins, and these antibiotics mainly target peptidoglycan bacterial cell wall because animal cells do not have cell walls and thereby antibiotics cannot damage the normal cells. In addition to that, lysozyme is considered as the human body’s own antibiotic. Lysozyme can break down the β-(1,4)-glycosidic bonds in peptidoglycan and destroying many bacterial cells. However, a layer of pseudo peptidoglycan in some archaea have the sugar residues are β-(1,3) linked N-acetylglucosamine and N-acetyltalosaminuronic acid. Therefore, the cell wall of Archaea is insensitive to lysozyme.

Differences Between Endocrine and Exocrine Glands

Difference Between Fragmentation and Regeneration

Difference Between Fatty Acids and Triglycerides 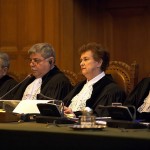 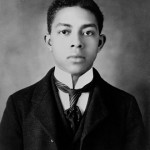 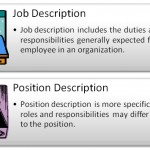