The key difference between PFGE and CRP analysis is that PFGE is a laboratory technique used for the separation of large DNA molecules by applying an electric field that periodically changes, while CRP (c-reactive protein) analysis is a technique that detects a ring-shaped protein in blood plasma.

PFGE and CRP analysis are two techniques used by scientists to detect different pathogenic organisms that cause damages to the human body. Pulsed-field gel electrophoresis (PFGE) is a direct laboratory technique that detects a DNA fingerprint of a pathogen, especially a bacterial isolate. CRP, on the other hand, is an indirect test used to detect a specific protein in blood resulted from an inflammation. These inflammations are normally due to infections of bacterial or other pathogens.

1. Overview and Key Difference
2. What is PFGE Analysis
3. What is CRP Analysis
4. Similarities Between PFGE and CRP Analysis
5. Side by Side Comparison – PFGE vs CRP Analysis in Tabular Form
6. Summary

Pulsed-field gel electrophoresis is a technique used for the separation of large DNA molecules in a gel matrix by applying an electric field. The electric field periodically changes its direction. It may be used for genetic engineering or genotyping of different organisms. The procedure for PFGE is relatively similar to the standard gel electrophoresis technique. The only difference is the voltage which periodically changes between three directions. One direction runs through the central axis of the gel while the other two run at an angle of 60 degrees on either side. As the pulse time is equal for each direction, it results in a net forward migration of DNA. 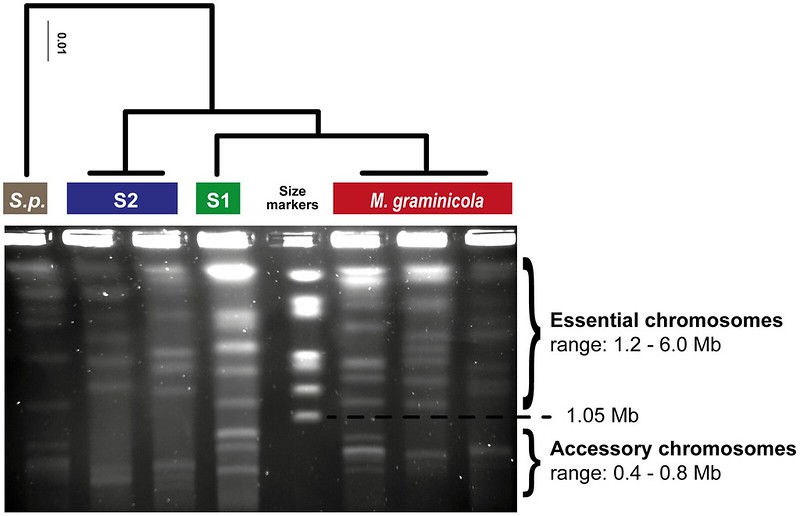 This procedure takes a longer time than general gel electrophoresis due to the size of fragments being resolved. In the PFGE technique, with the changes of electric field direction, various lengths of DNA react to the changes at differing rates. Large DNA fragments realign slowly in comparison to smaller DNA fragments that realign quickly. Therefore, a better separation of DNA fragments is possible by this technique.

PFGE is commonly used to detect bacterial pathogens such as Listeria monocytogenes. It is a popular method to detect clinical infections.

What is CRP Analysis?

C-reactive protein (CRP) is an annular (ring-shaped) pentameric protein found in blood plasma. Generally, CRP increases in concentrations in response to inflammation. CRP analysis is based on the detection of this protein in blood plasma. CRP protein is synthesized by the liver in response to certain factors secreted by macrophages and fats cells. CRP protein is the first pattern recognizing receptor (PRR) to be identified. 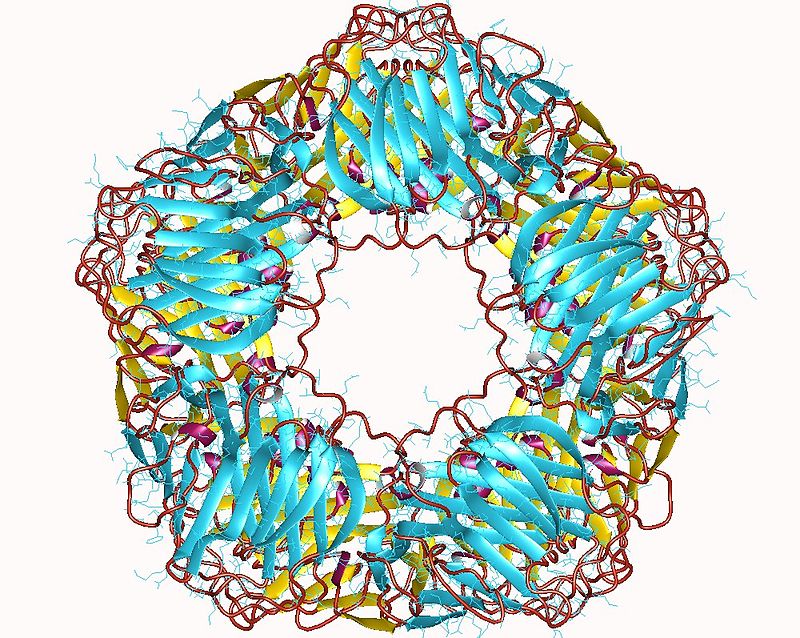 Increased CRP protein level can be observed after trauma, heart attack, autoimmune disorders, and bacterial infections such as sepsis. The normal CRP protein level in the blood plasma is 0.3-10 milligram per litre (mg/L). The blood is drawn from a vein, usually from the arm of the patient. The analysis is carried out by using a biochemical measuring procedure. In a CRP test result, CRP levels greater than 10 mg/L are a sign of a serious infection (sepsis). CRP test does not explain the location or the cause of inflammation. Therefore, doctors have to recommend further testing to explain the cause of the inflammation. Sometimes, CRP protein level rises due to smoking, obesity, and lack of exercises as well.

What are the Similarities Between PFGE and CRP Analysis?

What is the Difference Between PFGE and CRP Analysis?

Below is a list of important differences between PFGE and CRP analysis in tabular form. 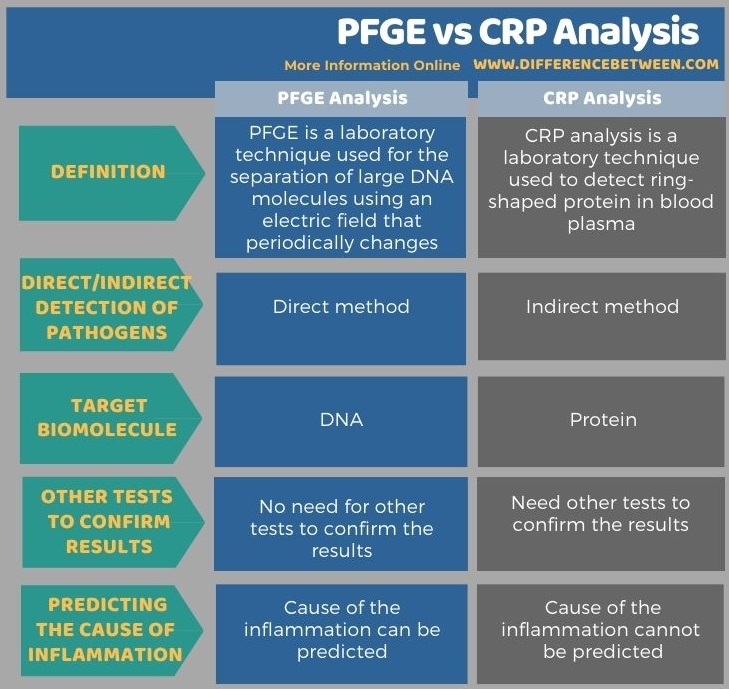 PFGE and CRP analysis are two tests routinely used in clinical laboratories. PFGE is a laboratory technique used by scientists to produce DNA fingerprints, especially bacterial pathogens. The C-reactive protein (CRP) test is used to detect inflammation by detecting raised c-reactive protein in the blood plasma. Both tests are important in detecting human diseases. Thus, this summarizes the difference between PFGE and CRP analysis.

Difference Between Nitrocellulose and Nylon Membrane

Difference Between Nucleotide and Nucleic Acid