Proteins and DNA provide the most fundamental layout to maintain the life on Earth. In fact, proteins determine the shape and functions of the organisms while DNA keeps the information needed for that. Hence, synthesis of protein and DNA replication could be understood as extremely important processes that take place in the living cells. Both these processes start from the nucleotide sequence of the nucleic acid strand, but those are different pathways. The important steps of both processes are explained, and the differences between them are discussed in this article.

Protein synthesis is a biological process that takes place inside the cells of organisms in three main steps known as Transcription, RNA processing, and Translation. In the transcription step, nucleotide sequence of the gene in the DNA strand is transcribed into RNA. This first step is highly similar to the DNA replication except the result is a strand on RNA in protein synthesis. The DNA strand being dismantled with DNA helicase enzyme, RNA polymerase is attached at the specific place of the start of the gene known as promoter, and RNA strand is synthesized along the gene. This newly formed RNA strand is known as the messenger RNA (mRNA).

The mRNA strand takes the nucleotide sequence to the ribosomes for the RNA processing. Specific tRNA (transfer RNA) molecules will recognize the relevant amino acids in the cytoplasm. After that, tRNA molecules are attached to the specific amino acids. In each tRNA molecule, there is a sequence of three nucleotides. A ribosome in the cytoplasm is attached to the mRNA strand, and the starting codon (the promoter) is identified. The tRNA molecules with the corresponding nucleotides for the mRNA sequence are moved into the large subunit of the ribosome. As the tRNA molecules come to the ribosome, the corresponding amino acid is bonded with the next amino acid in the sequence through a peptide bond. This last step is known as translation; indeed, this is where the actual protein synthesis takes place.

The shape of the protein is determined through the different types of amino acids in the chain, which were attached to tRNA molecules, but tRNA are specific to the mRNA sequence. Hence, it is clear that the protein molecules depict the information stored in the DNA molecule. However, protein synthesis could be initiated from an RNA strand, as well.

DNA replication is the process of producing two identical DNA strands from one, and it involves a series of processes. All these processes take place during the S phase of the Interphase of cell cycle or cell division. It is an energy consuming process and primarily three main enzymes known as DNA helicase, DNA polymerase, and DNA ligase are involved in regulating this process. First, DNA helicase dismantles the double helix structure of the DNA strand by breaking the hydrogen bonds between the nitrogenous bases of the opposing strands. This dismantling starts from an end of the DNA strand and not from the middle. Therefore, DNA helicase could be regarded as a restriction exonuclease.

After exposing the nitrogenous bases of the single stranded DNA, the corresponding Deoxyribonucleotides are arranged according to the base sequence and the respective hydrogen bonds are formed by DNA polymerase enzyme. This particular process takes place on both DNA strands. Finally, the phosphodiester bonds are formed between successive nucleotides, to complete the DNA strand using DNA ligase enzyme. At the end of all these steps, two identical DNA strands are formed from only one mother DNA strand. 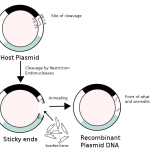