The human cardiovascular system has a four-chambered heart that pumps blood through a network of blood vessels using two major circuits called pulmonary and systemic circuits. Oxygen-poor blood pumped out of the heart’s right ventricle travels through the pulmonary circuit. As it passes through the lung, the blood gives off carbon dioxide and binds up oxygen. It then returns to the heart at the left atrium. Oxygen-rich blood pumped out of the left ventricle flows through the systemic circuit. The blood gives up oxygen in capillary beds of the body and re-enters the heart at the right atrium.

The systemic circuit supplies blood to the capillary beds in all parts of the body that are not served by the pulmonary circuit. In this circuit, oxygenated blood pumped by the left half of the heart circulates through the body and returns to the right atrium. The circuit starts when left atrium receives blood from the pulmonary veins. At any moment, systemic circuit contains about 84% of the total blood volume and begins at the left ventricle and ends at the right atrium.

What is the difference between Pulmonary Circuit and Systemic Circuit?

• When compared with the systemic circuit, pulmonary circuit is short; the lungs and pulmonary trunk are about 6 inches apart.

Difference Between Pulmonary and Systemic Circulation 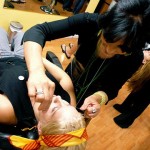