The number of neutrons a nucleus can hold differs from element to element. Among these isotopes, only some are stable. For instance, oxygen has three stable isotopes, and tin has ten stable isotopes. Most of the time simple elements have the same neutron number as the proton number. But in the heavy elements, more neutrons are there than the protons. The number of neutrons is important to balance the stability of the nuclei. When the nuclei are too heavy, they become unstable; therefore, those isotopes are becoming radioactive. For example, 238 U emits radiation and decays to much smaller nuclei. Isotopes may have different properties because of their different masses. For example, they may have different spins, thus their NMR spectra differs. However, their electron number is similar giving rise to a similar chemical behavior.

A mass spectrometer can be used to get information about isotopes. It gives the number of isotopes that an element has, their relative abundances and masses.

Radioisotope is an isotope with radioactivity. Radioactivity is the spontaneous nuclear transformation that results in the formation of new elements. In other words, radioactivity is the capability to release radiation. There are a large number of radioactive elements. In a normal atom, the nucleus is stable. However, in the nuclei of radioactive elements, there is an imbalance of neutrons to protons ratio; thus, they are not stable. To become stable, these nuclei will emit particles, and this process is known as radioactive decay. For example, Uranium has two isotopes as U-235 and U-238. From these two, U-238 is stable, but U-235 isotope is radioactive and it is used in atomic bombs and nuclear fission reactors. Radioisotopes are also important in medical diagnosis and treatment.

Difference Between Elements and Compounds 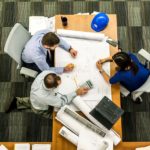