Rugby is an extreme contact sport that is very popular in the western world. It originated in UK in the 19th century. Rugby Union and Rugby League are two codes of the same game of rugby. Rugby Football Union was the parent body governing Rugby Football initially. It got split in 1895 when Rugby League was formed because of differences in opinion over payment to players. While the game remained essentially the same with differences in administration, Rugby League was made more entertaining for the spectators later by effecting changes in some of the rules of the game. Even though, the two codes look similar to an outsider, there are differences between the two to justify them as different versions of rugby.

Rugby Union is the older of the two codes of Rugby Football though Rugby Union is one of the two offshoots that came into existence with the split in 1895. The game of rugby itself is said to have originated because of an incident in a Rugby school where a student called William Web-Ellis picked up the football in between a game and ran holding it in his hands towards the opponent’s goal. In Rugby Union, match is played between two teams of 15 players each with 7 substitutes waiting in the wings. Each team has 8 forwards and 7 backs or defenders. As the name implies, forwards keep the ball in their possession for as long as possible in a bid to score goals. Taller and stronger players are made forwards to have a chance of scoring more goals. Backs are more agile but smaller than forwards. Backs also have better kicking abilities than forwards.

Rugby Union is controlled by International Rugby Board that was found in 1886 and which has its headquarters in Dublin, Ireland. There are 118 unions under it, and the sport is played in more than 100 countries around the world. Rugby World Cup and several other events are organized by IRB.

Rugby League is a contact sport and one of the two codes of Rugby Football that came into existence in 1895. Rugby League is considered by many as a fast paced contact sport that is very demanding physically. The elliptical ball can be kicked or carried in hands to the opponent’s goal post where it can be grounded with hands to score points. The players from the opposing team try to halt the progress of the forwards by tackling them and thwarting their moves. Rugby League is today mostly played by European countries, but it is also a national sport in Australia and New Zealand. There are currently 30 countries being members of Rugby League that is controlled by RLIF, the governing body. The duration of the game is 80 minutes that consist of two halves of 40 minutes. The game is played between two teams consisting of 13 players each.

What is the difference between Rugby Union and Rugby League?

• There are differences in the two rugby sports pertaining to tackles and scrums.

• Rugby Union has a position called flanker whereas there are no flankers in Rugby League.

Difference Between Basketball and Netball

Difference Between Test Cricket and ODI 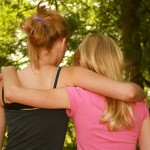