Synapsis vs Crossing Over

Synapsis and crossing-over are two interrelated processes, which are important to make chromosomal mutations. Mutations are the changes of the nucleotide sequence of genome of organisms. They are the main reason for the great deal of variation among offspring. Mutations can occur either naturally or artificially. One of the best mutation occurring is the crossing over. Both synapsis and crossing over are possible to occur during meiosis, which is defined as a form of cellular division that produces gametes during the sexual reproduction. 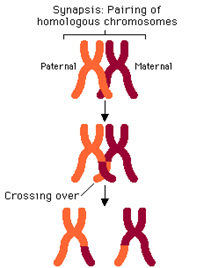 Crossing-over is the process by which homologous chromosomes exchange their genetic material while they are synapsed. During this process, equivalent parts of chromatid from each homologue break off and rejoin to the opposite site precisely. This is a natural process, which produces new combinations of genes, thus greatly enhances the variation among sexually reproduced offspring. Crossing-over can occur at any point along the chromosome and also at a number of different points on the same chromosome. This also helps to increase the variation of offsprings.

What is the difference between Synapsis and Crossing Over?

• Synapsis is the pairing of homologous chromosome during the meiosis I, whereas crossing-over is the exchange of genetic material between homologues.

• Crossing-over always occurs after the synapsis. Hence, the process of synapsis is essential for crossing-over.

• During the meiosis I, synapsis always occur, whereas crossing-over may or may not occur.

• Synapsis will ensure that each daughter cell receives one homologue from each parent and allow crossing-over.

• Unlike the synapsis, crossing-over results in a great variation among sexually reproducing individuals.