It is important to have a general knowledge of base pairing in DNA in order to understand the difference between transition and transversion mutations. There are five different nitrogenous bases in nucleic acids: adenine (A), guanine (G), cytosine (C), thymine (T) and uracil (U). First two bases (A & G) are purines while latter three (C, T and U) are pyrimidines. T is unique to DNA and U is unique to RNA. Purine bases form hydrogen bonds with complementary pyrimidine bases. It is known as a complementary base pairing of nucleic acids. Complement base of A is T in DNA. In RNA instead of T, U is present and A forms hydrogen bonds with U. Complement Base of G is C.  Purine bases are composed of two ring systems and pyrimidine bases are composed of one ring systems. Mutations occur in DNA and RNA base sequences due to interchanges in base pairing. Substitution of an incorrect base during DNA replication repairs by DNA polymerase enzymes. However, transversion and transition are two such mutations that occur in DNA due to substitution errors, and they are not recognized by enzymes for repairing. Transition mutation occurs due to an interchange of purines or pyrimidines. Transversion mutation occurs due to interchanges of pyrimidine for purines or purines for pyrimidines. This is the key difference between transition and transversion.

What is Transition Mutation?

Transition is a point mutation that occurs due to an interchange of purines (A ↔ G) or pyrimidines (C ↔ T) in DNA. It is a kind of a substitution mutation. During replication, the correct purine base can substitute another purine. For example, instead of A in the correct sequence, G can be substituted. Once G is substituted, complementary C will substitute to the other strand. In the same way, another pyrimidine base T can be substituted instead of pyrimidine base C and change the complementary base in the other strand. Transition mutations are more frequent than transversions. Single nucleotide polymorphism is a common type of point mutations, and two out of three SNPs are caused by transitional mutations. However, transition mutations are less likely to cause amino acid sequence changes. Hence, they remain neutral and are known as silent mutations. 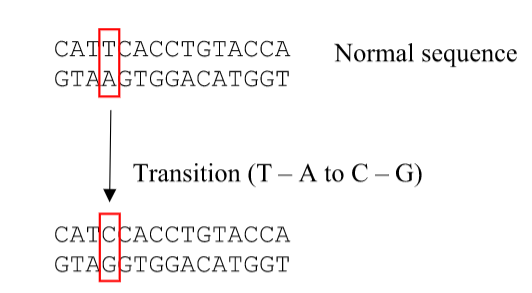 What is Transversion Mutation? 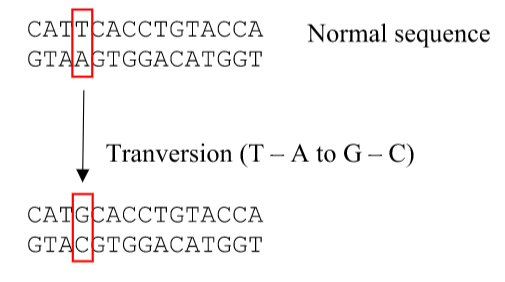 Transversion occurs in two possible ways since two pyrimidines and two purines are present. This type of mutation is less likely to produce incorrect amino acid sequences during translation. 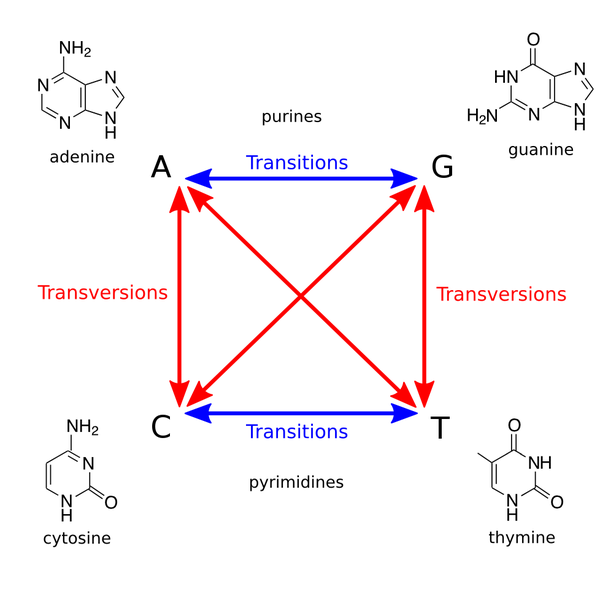 What is the difference between Transition and Transversion? 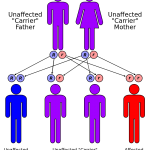 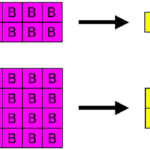