Trigonal planar and trigonal pyramidal are two geometries we use to name the three dimensional arrangement of atoms of a molecule in the space. There are other types of geometries. Linear, bent, tetrahedral, octahedral are some of the commonly seen geometries. Atoms are arranged in this way, to minimize the bond- bond repulsion, bond-lone pair repulsion, and lone pair-lone pair repulsion. Molecules with the same number of atoms and electron lone pairs tend to accommodate the same geometry. Therefore, we can determine the geometry of a molecule by considering some rules. VSEPR theory is a model, which can be used to predict the molecular geometry of molecules, using the number of valence electron pairs. Experimentally the molecular geometry can be observed using various spectroscopic methods and diffraction methods.

Trigonal planar geometry is shown by molecules with four atoms. There is one central atom, and the other three atoms (peripheral atoms) are connected to the central atom in a way that they are in the corners of a triangle. There are no lone pairs in the central atom; therefore, only the bond- bond repulsion from the groups around the central atom is considered in determining the geometry. All the atoms are in one plane; hence, the geometry is termed as “planar”. A molecule with an ideal trigonal planar geometry has an angle of 120o between the peripheral atoms. Such molecules will have the same type of peripheral atoms. Boron trifluoride (BF3) is an example for an ideal molecule having this geometry. Further, there can be molecules with different types of peripheral atoms. For example, COCl2 can be taken. In such a molecule, the angle can be slightly different from the ideal value depending on the type of atoms.  Moreover, carbonate, sulfates are two inorganic anions showing this geometry. Other than atoms in peripheral location, there can be ligands or other complex groups surrounding the central atom in a trigonal planar geometry. C(NH2)3+ is an example of such a compound, where three NH2 groups are bound to a central carbon atom.

Trigonal pyramidal geometry is also shown by molecules having four atoms or ligands. Central atom will at the apex and three other atoms or ligands will be at one base, where they are in the three corners of a triangle. There is one lone pair of electrons in the central atom. It is easy to understand the trigonal planar geometry by visualizing it as a tetrahedral geometry. In this case, all the three bonds and the lone pair are in the four axis of the tetrahedral shape. So when the position of the lone pair is neglected, the remaining bonds make the trigonal pyramidal geometry. Since the lone pair- bond repulsion is greater than the bond – bond repulsion, the bonded three atoms and the lone pair will be far apart as possible. The angle between the atoms will be less than the angle of a tetrahedron (109o). Typically the angle in a trigonal pyramid is about 107o.  Ammonia, chlorate ion, and sulfite ion are some of the examples showing this geometry. 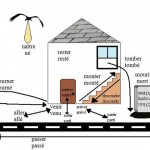 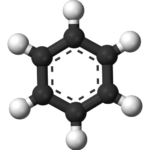