A turbojet is an air breathing gas turbine engine executing an internal combustion cycle during the operation. It also belongs to the reaction engine type of the aircraft propulsion engines. Sir Frank Whittle of United Kingdom and Hans von Ohain of Germany, independently developed the practical engines concept during the late 1930s, but only after the WWII, the jet engine became a widely used propulsion method.

A turbojet poses several disadvantages in performance at subsonic speeds, such as efficiency and noise; therefore, advanced variants were built based on the turbojet engines to minimize those problems. Turbofans were developed as early as 1940s, but not used due to less efficiency until 1960’s when Rolls-Royce RB.80 Conway became the first production turbofan engine.

Cold air entering through the intake is compressed to high pressure in the successive stages of an axial flow compressor. In a common jet engine, air flow undergoes several compression stages, and at each stage, raising the pressure to a higher level. Modern turbojet engines can produce pressure ratios as high as 20:1 due to advanced compressor stages designed with aerodynamic improvements and variable compressor geometry to produce optimal compression at each stage.

The pressurization of the air also increases the temperature, and when mixed with the fuel produces a combustible gas mixture. Combustion of this gas increases the pressure and temperature to a very high level (1200 oC and 1000 kPa) and the gas pushes through the blades of the turbine. In the turbine section, gas exerts force on the turbine blades and rotates the turbine shaft; in a common jet engine, this shaft work drives the compressor of the engine.

Then the gas is directed through a nozzle, and this produce a large amount of thrust, which can be used to power an aircraft. At the exhaust, the speed of the gas can be well above the speed of sound. The operation of the Jet engine is ideally modeled by the Brayton cycle.

The turbojets are inefficient at low speed flight, and optimal performance lies beyond Mach 2. Another disadvantage of the turbojets is that the turbojets are extremely noisy. However, they are still used in the mid-range cruise missiles because of the simplicity of production and low speed.

Turbofan engine is an advanced version of the turbojet engine, where the shaft work is used to drive a fan to take in large amounts of air, compress, and direct through the exhaust, to generate thrust. Part of the air intake is used to drive the jet engine in the core, while the other portion is directed separately through a series of compressors and directed through the nozzle without undergoing combustion. Because of this ingenious mechanism the turbofan engines are less noisy and deliver more thrust. 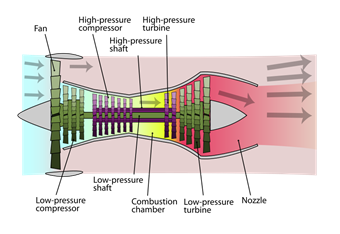 The bypass ratio of air is defined as the ratio between the mass flow rates of air drawn through a fan disk that bypasses the engine core without undergoing combustion, to the mass flow rate passing through the engine core that is involved in combustion, to produce mechanical energy to drive the fan and produce thrust. In a high bypass design, most of the thrust is developed from the bypass flow, and in the low bypass, it is from the flow through the engine core. High bypass engines are usually used for commercial applications for their less noise and fuel efficiency, and low bypass engines are used where higher power to weight ratios are required, such as military fighter aircraft.

What is the difference between Turbojet and Turbofan Engines?

• Turbojets were the first air breathing gas turbine engine for the aircrafts, while turbofan is an advanced variant of turbojet using a jet engine to drive a fan to generate thrust (turbofan has a gas turbine at the core).

• Turbojets are used in specific military applications at present, but turbofan remains the most preferable choice of propulsion for both military and commercial aircraft. 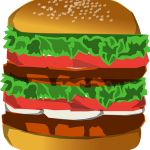