Australian fauna is the most unique of all as they are far different from most of the animals in the world, and that uniqueness is wonderfully coloured by kangaroos and wombats. These two animals are quite distinctive from each other in terms of appearance as well as in their ecological niches. Despite their taxonomic relationship with each other, being marsupials, the differences are prominent.

Kangaroo is the iconic national symbol of Australia, and this marsupial belongs in the Family: Macropodidae. There are four species of kangaroos in the Genus: Macropus including Red, Eastern grey, Western grey, and Antilopine kangaroos. Altogether, there are over 50 species, but only those four are the prominent and considered as true kangaroos. They have strong and large hind limbs adapted for hopping, and it is the largest mammal with hopping behaviours. They can move very fast with long hops, an excellent adaptation to evade the predators. Kangaroos are strictly herbivorous and mostly nocturnal. During daytime, most of the kangaroos rest in a cool shade. Using their well-adapted incisors, they can crop the grass very close to the ground. Their unfused mandible bones (lower jaw) are advantageous for a wider bite. Their pouch, located in lower abdomen, has teats inside to nourish the newborn joeys. They live in groups called mobs and the lifespan is about six years in wild with an expanded life in the captivity.

Wombat is an Australian marsupial belongs to Family: Vombatidae. They are small mammals with an average body weight of 20 – 35 kilograms. They have short and stubby ails, which are unique to them. Their powerful claws and sharp rodent-like teeth are useful to dig the ground. Interestingly, wombats have their pouch located on the backside of their body, which prevents the collection of dirt inside the pouch while digging. They are herbivorous and the digestion is an extremely slow process, which takes about 8 to 14 days for complete. Wombats are slow moving animals, but they can run fast when a predator is around. Additionally, they show an interesting technique to protect themselves against predators, known as toughened rear hide. Their very short or almost absent tail and the toughened backside make it difficult for a predator to grab the wombat. There are three species of them, known as Common, Northern hair-nosed, and Southern hairy-nosed wombats. However, a healthy wombat lives about 15 – 20 years in wild and longer in captivity. 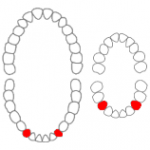 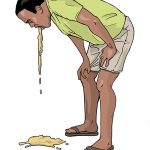