This is one of the latest and most sophisticated iPhones introduced by Apple up to today. Furnished with an Apple A8 chip that consists an ARM based Dual-core 1.4 GHz Cyclone processor and a PowerVR GX 6450 GPU, together with 1GB of RAM it supports applications and games at superb performance. The 8MP camera combined with unique features such as optical image stabilization, phase detection autofocus, dual-LED flash and many other features allow capturing of photos of great quality. A resolution of 1080p at 60fps with optical stabilization feature enables recording of very detailed videos. The fingerprint sensor that comprise Touch ID technology lets the usage of fingerprint as the password providing very high level of security. Different models are available for different prices, where the storage capacity can be selected from either 16GB or 64GB or 128 GB. However, one drawback is that iPhone 6 Plus does not support memory card, but a size like 128GB is a huge storage capacity for a smartphone. The display has a resolution of 1080 x 1920 pixels and about 401 ppi pixel density and the images rendered are clear even at wide viewing angles. Dimensions are 158.1 x 77.8 x 7.1 mm making it a very slim phone. The weight is 172 g. Hardware also includes sensors such as accelerometer, gyroscope, proximity sensor, compass and barometer. The operating system found on iPhone 6 Plus is iOS 8 which is upgradable to version 8.1. This operating system is a very simple but very user-friendly one with minimal delays and crashes. 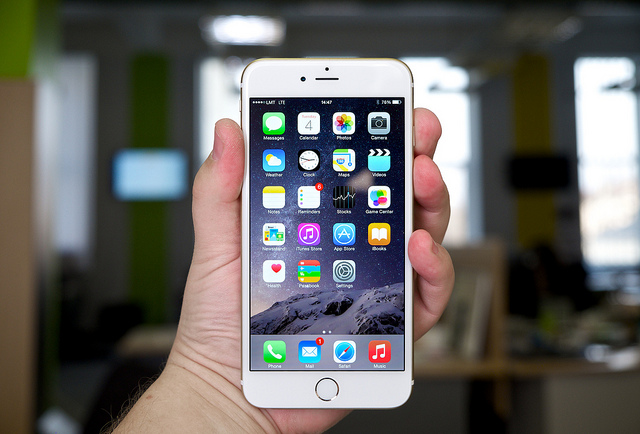 This is a very recent smartphone introduced by Samsung with stunning specifications. The processor being Quad core with 3GB of RAM make it is very close to the values of a notebook computer. 3GB of RAM is a really large capacity for a smartphone that will enable huge degree of multitasking and running of any memory hungry app. The size is 153.5 x 78.6 x 8.5 mm and the weight is 176g. A special feature in Galaxy Note 4 is that it supports control by‘S pen stylus’ which makes it possible to take onscreen notes or draw figures very easily. With an immense resolution 1440 x 2560 pixels with 515 ppi pixel density, the screen can render pictures at great quality and detail. With a powerful GPU together with a superb resolution, this is the ideal phone for games that requires sophisticated graphics. The camera is 16MP which is a huge resolution for a camera on a smartphone. Videos can be recorded at an immense resolution of 2160p. There are lot of sensors in the phone such as accelerometer, gyroscope, proximity sensor , compass and barometer just like in iPhone 6 Plus, but apart from that it also has very new sensors that can sense gesture, UV, heart rate and SpO2, making the smart phone an ideal device to sense the changes happening in the environment. The device runs the latest Android 4.4.4 edition which is also known as KitKat. This operating system lets a huge degree of customizations, as necessarily as the user wishes. 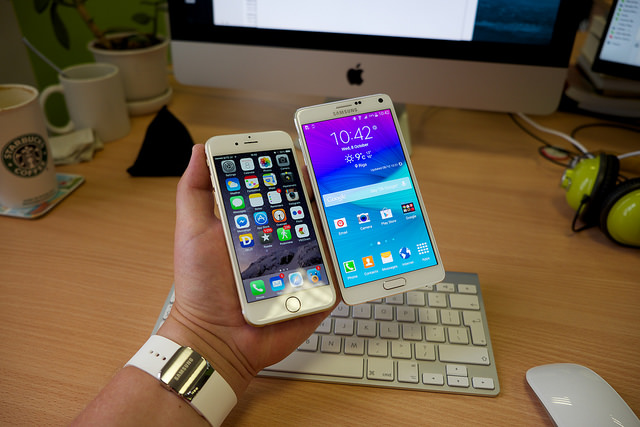 What is the difference between Apple iPhone 6 Plus and Samsung Galaxy Note 4?

• Apple designs IPhone 6 Plus, but Samsung designs galaxy Note 4. Both were unveiled in September 2014.

• Galaxy Note 4 supports usage of a stylus pen called “S Pen Stylus” that ensures easy and precise drawing, writing and control. However, iPhone 6 Plus do es not have this feature.

• The sims supported by Apple iPhone 6 Plus are nanosims while they must be micro Sims for Galaxy Note 4.

• Both have USB interfaces but Galaxy Note 4 supports special features such as USB Host, USB On-the-go.

• Galaxy Note 4 has extra sensors such as gesture, UV, heart rate and SpO2 that are not found on iPhone 6 Plus.

Difference Between LG Optimus 4X HD and HTC One X 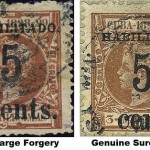