Fungi are a group of microorganisms which include harmful and beneficial species. They serve as the main decomposers in the environment. Fungi show sexual and asexual reproductive mechanisms in which sexual and asexual spores are formed as a medium of propagation. Fungi spores are very similar to seeds. They germinate and give rise to a new fungal colony. Spores have simple structures. However, there is a wide variety of fungal spores, which differ from shapes, colours, forms and sizes. Fungal spores are useful in characterization and differentiation of fungal species. Asexual spores are produced either in sporangia or as conidia. Sexual spores are produced from mating between two different fungal hyphae. There are four major kinds of sexual spores named oospores, zygospores, ascospores and basidiospores. The key difference between ascospore and basidiospore is that ascospore is a sexually produced spore of fungal group ascomycetes while basidiospore is a sexually produced spore of fungal group basidiomycetes.

Ascospore is a sexual fungal spore produced by ascomycetes fungi. Ascospores are formed as a result of sexual reproduction between two different ascomycetes fungi. Ascospores are very specific to ascomycetes since they are produced inside ascomycetes’ specific special microscopic structures called ascus. Ascus is a cylindrical or spherical structure developed within the cells or hyphae of the fungus. A typical ascus bears eight ascospores. Hence, it was given the name ascus, referring to the structure consisting of eight spores. There are certain species which produce one spore per ascus and also over a hundred spores per ascus.

Asci are internal structures developed within some kind of enclosing structures of ascomycetes. Therefore, ascospores are also produced internally without protruding from the hyphae. Formation of ascospores is a complex process which follows two consecutive cell division processes: meiosis and mitosis. The diploid zygote divides by meiosis to produce four haploid nuclei. Each of the four haploid nuclei duplicates by mitosis to produce eight haploid cells called ascospores inside an ascus.

Ascospores can be coloured or hyaline and can have different shapes.Common fungal species which produce ascospores include Penicillium spp, Aspergillus spp, Neurospora spp, yeast, etc. 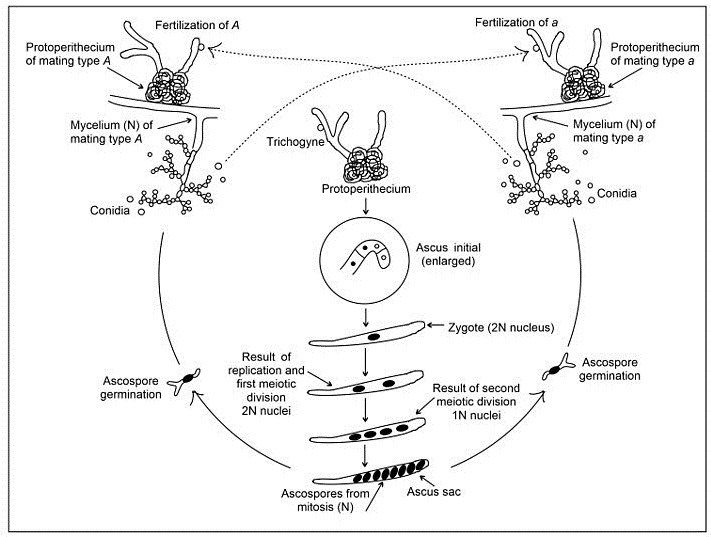 Basidiospores bear attachment pegs called hilar appendage in each spore, which occurs due to the attachment with the basidium; it can be used to identify basidiospores from other spores. Basidiospores are asymmetrical and single celled. They possess different shapes ranging from spherical to oval to oblong to cylindrical. Basidiospores are served as the main dispersal unit of basidiomycetes fungi. 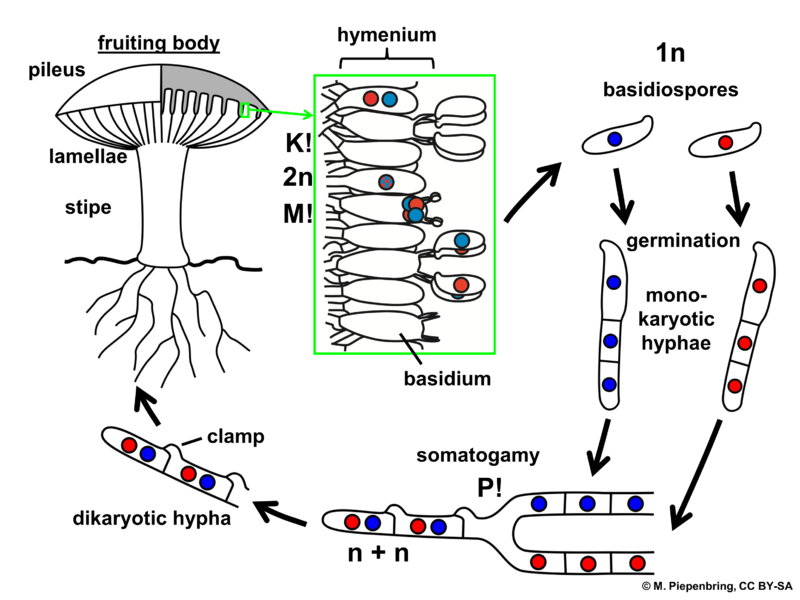