The key difference between coal tar and bitumen is that coal tar is a synthetic substance, whereas bitumen is a naturally occurring substance.

Both coal tar and bitumen can be observed as dark, thick, highly viscous liquids. These are mainly composed of carbon. Bitumen, also called asphalt, can be found either naturally or it occurs as a byproduct of refining processes.

1. Overview and Key Difference
2. What is Coal Tar
3. What is Bitumen
4. Side by Side Comparison – Coal Tar vs Bitumen in Tabular Form
5. Summary

What is Coal Tar?

Coal tar is a dark, thick liquid that forms as a byproduct of the production of coke from coal. This liquid has both medical and industrial uses. Coal tar is used in the field of medicine due to its important properties like antifungal, anti-inflammatory, anti-itch, and antiparasitic properties. In industrial applications, coal tar is important because of its flammable nature and sealing ability.

The two major trade names of coal tar are Balnetar and Cutar. Coal tar was produced in 1665, as a component important in the field of medicine. According to the WHO listings, coal tar is among the safest and most effective medicines. Usually, coal tar is an important ingredient in some shampoo, soap, and ointment. The method of administration is topical. That means; we can apply it on skin or hair. It is used as a treatment for dandruff and psoriasis. Also, it can kill or repel lice. In medicinal applications, coal tar is used in one of two forms: as crude coal tar or as coal tar solution.

Furthermore, coal tar is important in the field of construction and other industries. In construction sites, coal tar is known as a sealing agent; it is mostly used by incorporating into parking-lot seal coat products. In industrial applications, it is used in boilers for heating due to the flammable nature of coal tar.

However, there are some side effects of using coal tar in different products. The common side effects include skin irritation, sun sensitivity, allergic reactions, and discolouration of the skin.

Bitumen, also called asphalt, is a naturally occurring dark, thick liquid that is highly viscous and sticky. Sometimes it can be found in the semi-solid state as well. Other than in natural deposits, bitumen forms as a byproduct in refining processes. The naturally occurring form of bitumen is often referred to as “crude bitumen”. It has a viscosity that is similar to the viscosity of cold molasses. The synthetic form of bitumen is named “refined bitumen”, which is obtained from the fractional distillation of crude oil at high temperatures. 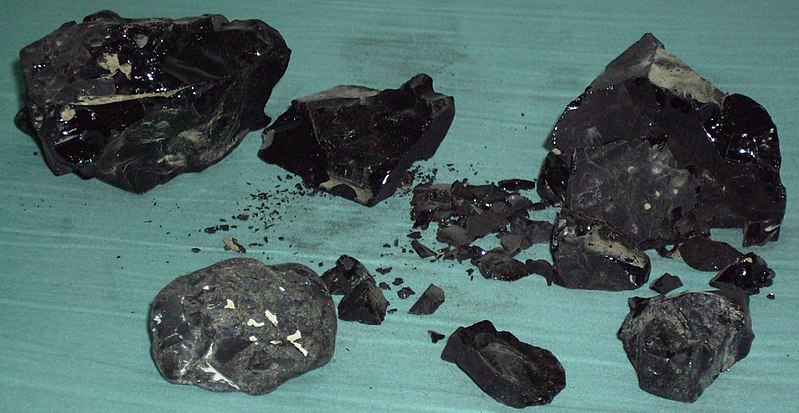 The major application of bitumen is in road construction. Here, bitumen is the glue or binder which is mixed with aggregates to create asphalt concrete. In addition, it is used in producing some waterproofing products such as sealing flat roofs. The applications of bitumen are in the construction of highways, airport runways, car parks, tennis courts, roofing, dam, pipe coating, etc.

What is the Difference Between Coal Tar and Bitumen?

Coal tar is a dark, thick liquid that forms as a byproduct of the process of production of coke from coal. Bitumen, on the other hand, is a naturally occurring dark, thick liquid that is highly viscous and sticky. The key difference between coal tar and bitumen is that coal tar is a synthetic substance, whereas bitumen is a naturally occurring substance.

Below infographic summarizes the difference between coal tar and bitumen. 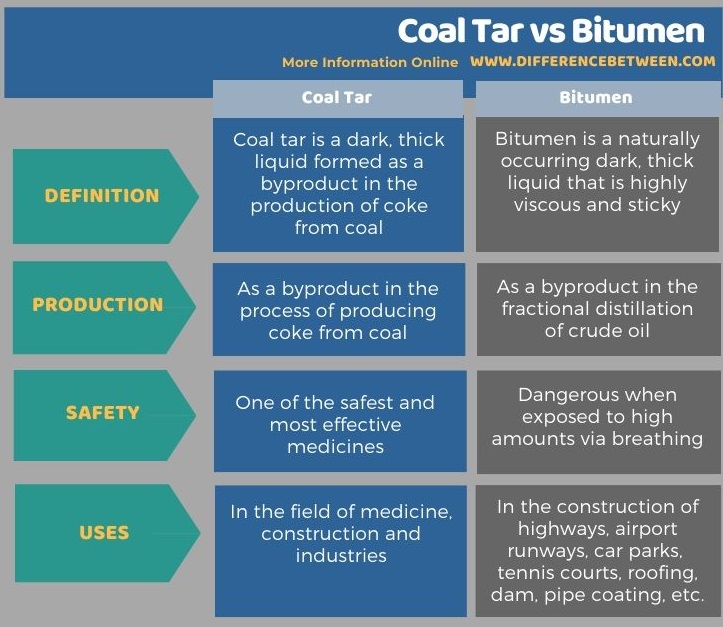 Difference Between Linoleum and Marmoleum

Difference Between Calcination and Sintering

Difference Between Pyrrole Furan and Thiophene

Difference Between Detergent and Chaotropic Agent 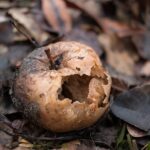 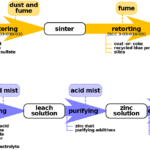