An instance variable is a type of variable that is present in object oriented programming. It is a variable that is defined in a class, and each object of that class holds a separate copy of that variable. On the other hand, the use of local variables is not limited to object oriented programming languages. It is a variable that can be assessed only within a particular block of code (e.g. function, loop block, etc.) in which it is defined. Due to this reason, local variables are said to have a local scope.

What is an Instance Variable?

What is a Local Variable?

What is the difference between Instance Variable and Local Variable?

Difference Between Inheritance and Composition 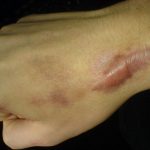