Specific latent heat means, the amount of heat energy needed to convert a phase completely to another phase of a unit mass of a substance.

m = mass of the substance 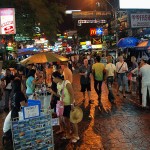