Energy is one of the primary constituents of the universe. It is conserved throughout the physical universe, never created or never destroyed but transforming from one form to another. Human technology, primarily, is based on the knowledge of methods to manipulate these forms to produce a desired outcome. In physics, energy is one of the core concepts of investigation, along with matter. Electromagnetic radiation was comprehensively explained by physicist James Clarke Maxwell in 1860`s. 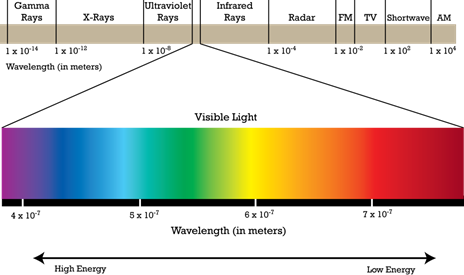 Light is the electromagnetic radiation between the wavelengths 380 nm to 740 nm. It is the range of the spectrum to which our eyes are sensitive. Therefore, humans see things using the visible light. The color perception of the human eye is based on the frequency/ wavelength of light.

With the increase in frequency (decrease in the wavelength), the colors vary from red to violet as shown in the diagram.

The sun emits most of its energy as UV and visible light. Therefore, life developed on earth has a very close relationship to the visible light as an energy source, media for visual perception, and many other things.

The region is the EM spectrum below the infrared region is known as the Radio region. This region has wavelengths from 1mm to 100km (the corresponding frequencies are from 300 GHz to 3 kHz). This region is further divided into several regions as given in the table below. Radio waves are basically used for communication, scanning, and imaging processes.

What is the difference between Light Wave and Radio wave?

• The radio waves and light are both electromagnetic radiations.

• Light is emitted from a relatively higher energy source/ transition than the radio waves.

• Light has higher frequencies than radio waves and has shorter wavelengths.

• Both light and radio waves display usual properties of waves, such as reflection, refraction, and so forth. However, the behavior of each property is dependent on the wavelength/ frequency of the wave.

• Light is a narrow band of frequency in the EM spectrum while radio occupies a large portion of the EM spectrum, which is further divided into different regions based on the frequencies.

Difference Between Transverse and Longitudinal Waves

Difference Between Radio Waves and Microwaves 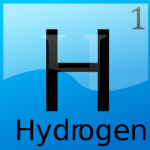 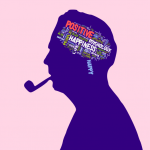 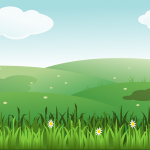