Kindle Fire HDX 8.9 is a very powerful multipurpose tablet introduced by Amazon. It is extremely light with just 374g and extremely thin making it very comfortable to be handled even with one hand. It is furnished with a fast quad-core 2.5 GHz Snapdragon 805 processor and 2GB of RAM that ensures very smooth multitasking. The Adreno 420 GPU together with the exclusive HDX display can render vivid lifelike images with a really good acceleration for games. The display tha t has a huge resolution of 2560×1600 with a pixel density of 339 ppi provides perfect colors. The features such as dynamic light control and dynamic image contrast feature intelligent light and contrast control based on surrounding light conditions, make the device similarly suitable for indoor as well as for outdoor. The rear camera can capture 8 megapixel images and 1080p HD videos while the front camera is a 720p one making it ideal for video calls. The device powered by Fire OS 4 which is a Linux-based operating system designed by Amazon has lot of unique feature s. Models that have 16GB, 32GB and 64 GB of internal memory are available and also editions that support 4G cellular networks are available. The device has a battery life about 12 hours for mixed use. 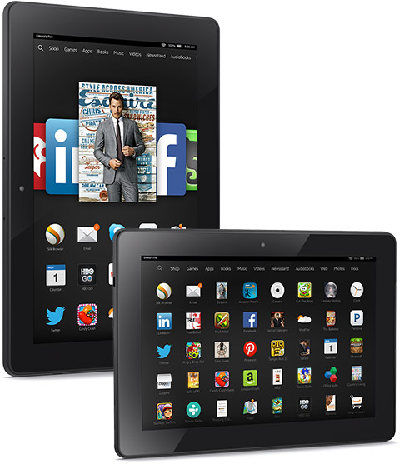 Google Nexus 9 is a powerful tablet by Google, that is powered by the latest Android operating system known as Lollipop. The device has a latest processor from NVIDIA, that is 2.3GHz 64-bit NVIDIA Tegra K1 Dual core and a RAM capacity of 2GB that enables smooth performance. When specifications are considered, the dual core processor in Nexus 9 seem to be bit behind the quad-core processor in Kindle. The 192-core Kepler GPU is a very powerful one which is manufactured by the famous GPU manufacturer NVIDIA; hence Nexus 9 has an advantage over Kindle when graphics processing is considered making the device ideal for game play. The display is an 8.9 inch IPS LCD that supports a resolution of 1536 x2048. Unlike the 16:9 widescreen display on Kindle this device has a 4:3 classical resolution. This screen is hence very easy to be handled and extremely good for apps like web browsing but when playing videos that are usually 16:9 ones it is a disadvantage. The battery is a 6700mAh one that can provide video playback up to 9.5 hours, internet usage up to 9.5 hours and standby time up to 30 days. The rear camera can capture photos at 8MP while videos can be recorded at 1080p HD quality. A front camera which is 1.6MP also exists while there are dual front-facing speakers as well that supports HTC BoomSound. Device supports a detachable Nexus 9 Keyboard Folio that can convert the tablet into a small laptop. Device supports networks up to 4G as well. 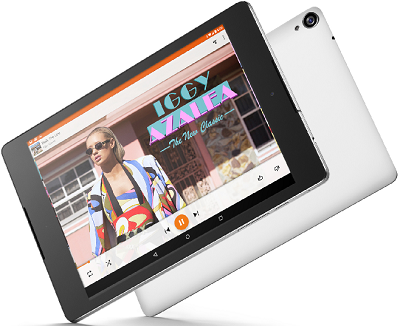 What is the difference between Amazon Kindle Fire HDX 8.9 and Google Nexus 9?

• The pixel density of the display in Amazon Kindle is a bit higher which is 339 ppi where it is 288 ppi on Google Nexus.

• Kindle has a Quad core 2.5GHz Qualcomm Snapdragon 805 processor while the processor in Nexus 9 is a Dual core, 2.3 Ghz NVIDIA Tegra K1 processor.

• Amazon Kindle has an Adreno 420 GPU while Nexus 9 has 192 core Kepler GPU by the graphics processor manufacturing giant NVIDIA.

• Kindle has 16GB, 32GB internal storage capacities and also a 64GB edition while Nexus 9 has only 16GB and 32GB editions.

Both are up to date tablets where the Android lovers would go for the Google Nexus, which is powered by the latest Android version 5.0, which is Lollipop. On the other hand, Amazon Kindles runs Fire OS 4 which is a Linux based operating system by Amazon itself which also has many unique features. The display sizes are different where Nexus 9 having a 4:3 display makes the device easy to hold and ideal for general apps like web browsing but the 16:9 ratio of the display in the Kindle is ideal for video playback.

Difference Between Nook and Nook Color