Brown and white eggs are the two varieties of egg we get depending on the breed of the hen. It has always been a perpetual question not just with kids but also with adults as to what is the difference between brown and white eggs. Though it has already been properly defined, somehow this ubiquitous puzzle remains a staple discussion among everyone.

Brown eggs simply mean that it has been laid by a specific breed of hens that usually have colored feathers. Some of the most common breeds are Rhode Island Red and New Hampshire. The reason for these eggs color is caused by protoporphyin which is a substance that is found in the blood of the chickens. This is mainly responsible for the pigmentation of the egg as soon as it is formed.

White eggs are of course, laid by a particular type of chicken that produces less pigmentation on the surface of the egg. This is the most common type of eggs and is available almost everywhere. One of the most common breed of hens that lays such eggs are White leghorn, which is very prominent in almost all the countries. Contrary to popular belief, this egg does not have extra calories nor does it have additional fatty content.

Difference between Brown and White Egg

As per the Egg Nutrition Center, the only difference between the two is their color. This in fact is the result of variation in their genetic make-up the very same reason that they have different colored feathers. There were previous claims that brown eggs are far healthier than the white ones. The reason, so they say is that it is more organic and nutritional since the feeds that were given to the chickens were more natural. But recent studies show that there’s really no difference at all between the two, not even in their nutritional content.

Perhaps, one of their most apparent differences is the price. Since usually brown eggs are more expensive than white ones but this is only because brown chickens are larger thus requiring more maintenance. But it may all boils down to personal preference, taste and even the budget.

Difference Between McDonald’s and KFC

Difference Between Jam and Marmalade 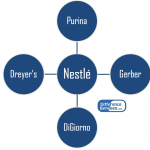